Even though Brand was the one who wanted to settle down in his marriage, it looks like divorce has turned him into a bachelor. He told Jay Leno he is practicing at being single. 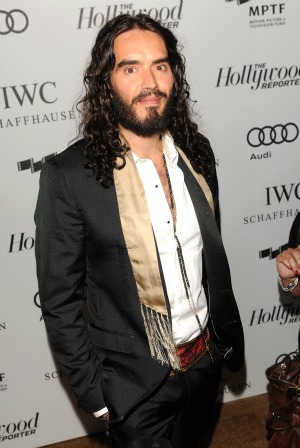 Russell Brand shocked everyone when he filed for divorce from wife Katy Perry in December. The divorce was finalized in July, and he has been seen out with a couple of different women since then. He sat down with Jay Leno on Thursday to talk about the single life.

“Well, mostly I’ve been devoting myself to single life so I can finally win that shagging Olympic medal,” Brand said. “I’m putting in the training.”

That training may include his short-term girlfriend Isabella Brewster, Jordana Brewster’s sister, whom he was linked to for a few months over the summer. After performing at the London Olympic Games’ closing ceremony, he was rumored to be dating Spice Girl Geri Halliwell also.

Brand was said to have ended the marriage over Perry’s partying and unwillingness to have children. But when Leno asked him if he would like to get married again, Brand made it sound like it’s not something that will be happening anytime soon.

“Yeah, definitely, because I really, really love people,” he joked, according to The Huffington Post. “But what I think might be nicer would be more of one of those situations — Ah, now that Mitt Romney, he’s a Mormon, isn’t he? Where you can have several wives.”

Katy Perry may be better off without him. She was also not ready to be tied down, although she is now dating another serial dater, John Mayer. The couple have been on and off for months, but recently, they have been seen together more and more. Mayer has been linked to numerous other celebrities, including Taylor Swift, who may have even written a (not-so-nice) song about her relationship with him.

If Perry can handle Russell Brand, though, she may just be the perfect match for someone like John Mayer. As for Brand’s claim about his new hobby, he is probably succeeding — unless the fact that he has only been linked to the two celebrities since his divorce means he’s not Olympic grade after all.