Denzel Washington adds another character type to his acting arsenal. 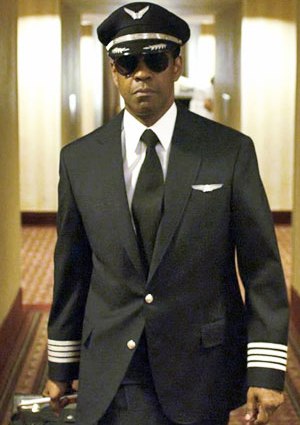 Denzel Washington has been a detective, football coach, doctor and so much more during his long acting career. In his latest movie, Flight, he channels an ace pilot who seems confident and fearless at his job, but in real life Denzel admits to SheKnows he is a bit of a “scaredy-cat.”

“We did a touch and go landing, when we came in from Vegas. We came in over the hill and hit some major, major turbulence… I did [get nervous].”

Denzel then divulges his secret to overcoming his fear: “Then I calmed down. I actually got extremely calm, said a prayer… There was nothing I could do about it, and actually my focus kind of became on the flight attendant because she freaked out.

“I was like, ‘Wait a minute, she is supposed to be telling me what to do — aren’t you the guys who are always in control?'”

Speaking of control, Denzel’s character, Captain William “Whip” Whitaker in the movie Flight exudes complete control when flying jets, but he keeps a part of his life under the radar — the fact that he is battling drug and alcohol addiction.

“It’s not so much about the flying as it is about the addiction, at least as it relates to my character,” Denzel acknowledges when asked about what he feels the movie is truly about.

Watch our interview with Denzel Washington

While Denzel gives a tremendous amount of credit to the “way the writer wrote it, the ups and downs, the mood swings [as a result of addiction],” he still had to do extensive research into the behavior and temperament of an addict.

“I think Denzel does such a great job of looking at a guy who has this addiction problem, he makes it really believable — doesn’t make the guy out to be a nut case. He makes him just a really, in an ironic way, a really sober cat who has a really big problem,” relates Bruce Greenwood, who plays Charlie Anderson, one of Whip’s confidants in the movie.

Despite the fact that the rest of the cast strongly agrees with Charlie, Denzel still criticizes himself.

“There is one scene I wish I had done a little differently. There is a scene where I am screaming at her [Nicole, played by Kelly Reilly] out at the barn, when I am cleaning up the plane, and I call her a few funky names. And then I come into the house to sort of make up with her… It should have had a bit more tears because the emotional highs and lows that they [addicts] have.”

Regardless of what Denzel may think of his acting, his performance soars in the movie Flight. His acting prowess highlights his ability to be quite the chameleon of an actor no matter what part he plays.