Jennifer Lopez and Casper Smart silence all of the naysayers by celebrating their one-year anniversary on Twitter. 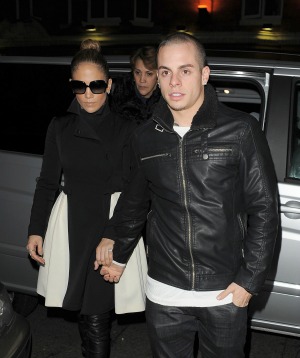 It looks like the May-September romance of Jennifer Lopez and Casper Smart is here to stay. The couple publicly honored their one-year anniversary on Twitter, on Thursday.

Lopez tweeted, “BEAUcasperSMART BEAR!!!!!!!!!!!!!! Today is OUR’s!! Thank you for sharing your beautiful smile with me everyday!”

Her man replied with “Happy 1 yr. anniversary to the most Gorgeous, Kind, Sweet, Funny, Beautiful Lil Bear in the world… Love Bear #October25”

Any rumors that the dancing duo were on the rocks appear to be completely false, as the two are proving that their age difference doesn’t matter at all. Lopez and Smart first confirmed their dating status last fall, after they met through work while he was working as her backup dancer. He now holds the title of chief choreographer on her joint tour with Enrique Iglesias.

Many people in her entourage have doubted their relationship, since JLo is 43 years old and Smart is only 25 years old, but it seems to work.

Initially, Lopez’s manager, Benny Medina, told Vogue, “The thing that I always sort of wished is that she would give herself time to just naturally meet someone, instead of having obsessive guys pursue her… The ease with which that obsession becomes a relationship I think sometimes works against her ability to have a real, meaningful relationship.”

The relationship also came on the heels of her separation from singer Marc Anthony, to whom she was married for seven years. Within four months of the separation announcement, Smart was seen with the “Jenny from the Block” singer and playing with the twins, Emme and Max, from her marriage to Anthony.

Lopez and Smart have admitted that their romance didn’t happen overnight.

Smart told Amy Robach in a Good Morning America (GMA) interview, “I don’t think it was [love at first sight] for either of us. It was just very natural how it happened. There was nothing before, no flirting, nothing.”

The big question now is, will the two marry, since Lopez has walked down the aisle three times already?

In the same GMA interview, the former American Idol judge revealed, “Yes, for me the biggest dream is the fairy tale. I will never give up on that dream. It can be difficult for anybody who has to stand by my side, but at the end of the day, I know that I deserve that.”

Now let’s see if Casper Smart is the one for the Hollywood diva.

Image courtesy of Will Alexander/WENN.com