Lil Wayne is getting better after an emergency trip to a Texas hospital on Thursday. 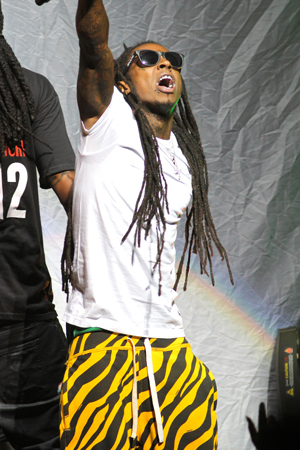 Lil Wayne’s plane had to make an emergency landing in Texas on Thursday night after the rapper suffered a medical emergency on board. He was transported to a local hospital and spent several hours there before checking out around 6 p.m.

Wayne didn’t suffer from a seizure, contrary to reports.

“Lil Wayne was successfully released from the hospital after being treated for a severe migraine and dehydration,” his rep said in a statement. “He is at home on doctor mandated rest and will return to work soon. He appreciates all of his fans for their support and love.”

Dehydration seems to affect a lot of celebrities — it’s one of Lindsay Lohan’s favorite ailments. However, Weezy hasn’t really complained of health problems during his career, but he did almost die from a self-inflicted gunshot wound when he was 12.

“Little Dwayne picked up the gun and began horsing around with it in front of a stereo blaring music. At about 1:15 p.m., the boy accidentally fired a bullet through his chest. The slug then shot out the lower left corner of a window,” the New Orleans Times-Picayune wrote in a 2009 profile of the off-duty cop who saved him.

“Somehow, it missed every vital organ. But the boy was dying. Dwayne dialed 911, wheezing as he spoke. As blood poured out of the wound and formed a puddle near the stereo, the operator pressed for details. ‘You will find out when you get here,’ the boy said, according to the police report.”

After that, a little dehydration seems like a piece of cake.