Many male sex symbols have become the victim of vile homophobic rumors, and now Rod Stewart is putting one to rest. Hear his explanation of the roots of his naval urban legend. 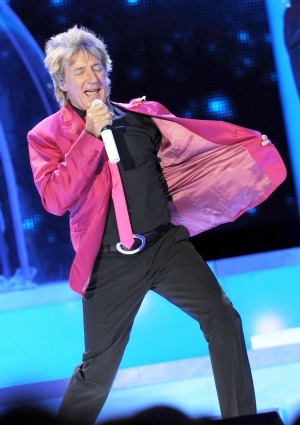 Jon Bon Jovi, Richard Gere, the New Kids on the Block, any ’80s hair band and Rod Stewart are just a few male sex symbols who have had a homophobic, highly gross rumor attached to them. Now Rod Stewart is setting the record straight on where his started — and it wasn’t in a San Diego bar.

The rumor goes that Stewart handed out so much oral sex at a bar in San Diego to dozens and dozens of servicemen that he had to be rushed to the emergency room to have his stomach pumped as it was bursting with the semen of all those seamen.

Not only is that incredibly gross, it’s physically impossible — and, as Stewart explains in his new autobiography aptly named Rod: The Autobiography, not even close to being true. In fact, he said, the whole thing can be chalked up to a bitter ex-publicist guzzling haterade.

Stewart explained that on a trip to Hawaii, the hotel was short rooms so publicist Tony Toon was sharing with Stewart’s 7-year-old stepson. Things fell apart from there.

“Toon, of course, couldn’t resist pulling some bloke in the bar that evening and taking him back to the room. I fired him in the morning,” Stewart explains in the book.

“Toon’s revenge was absolutely inspired. He fed the press a story in which, as a consequence of an evening spent orally servicing a gang of sailors in a gay bar in San Diego, I had been required to check into a hospital emergency room to have my stomach pumped.”

“I have never orally pleasured even a solitary sailor, let alone a ship’s worth in one evening. And I have never had my stomach pumped, either of naval-issue semen or of any other kind of semen. With minor variations… this story has stayed with me ever since. Say what you like about Tony Toon — and God rest his soul — but he was good at his job.”