Axl Rose’s Jimmy Kimmel Live! interview Wednesday night wouldn’t have been complete without at least a short stroll down memory lane. The Guns N’ Roses co-founder says one particular wardrobe choice helped make hitchhiking across the country easier, back in the day. 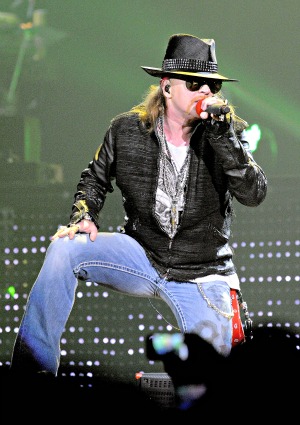 “It’s a miracle,” Axl Rose replied with a smile. The 50-year-old musician, who seldom does interviews, will soon kick off a 12-night run in Las Vegas, and it’s safe to assume he won’t have to get to the gig in the same manner he traveled out west in his pre-fame days.

Recalling he was around age 19 when he moved to Hollywood, Axl Rose said, “Yeah, I hitchhiked out here.”

“Did you meet a lot of shady characters along the way?” inquired Jimmy Kimmel, to which the guest concurred with a smirk, “Unfortunately, yes.”

“How long would you have to wait between cars to get somebody [to pick you up]? And were you wearing the codpiece?”

“Yeah, yeah I was,” Axl Rose replied with a laugh. “When you wear the codpiece you get a ride a little quicker.”

Axl Rose says no thanks to Hall of Fame >>

The codpiece — a pouch at the crotch of the tight-fitting breeches worn by men in the 15th and 16th centuries, for those not in the know — is also a favorite wardrobe choice for male rock stars. Axl Rose famously wore one through most of Guns N’ Roses’ Appetite for Destruction Tour, which kicked off in 1987.

Despite having arrived in Hollywood at least relatively safe and sound, it was still “a few years” before Axl Rose started making money as a musician.

“I worked at Tower Video for a while,” the man born William Bruce Rose, Jr shared of making ends meet in the meantime. “I became a manager for a very short amount of time… I let everybody have beers after work.”

After a hearty round of cheers from the audience, Jimmy Kimmel commented, “You know, it’s funny, because I think every video store employee thinks they’re going to be a rock star one day — you’re the one that actually did.”