Taylor Swift stops by Ellen on Thursday, but she refuses to play into host Ellen DeGeneres’ dating game. 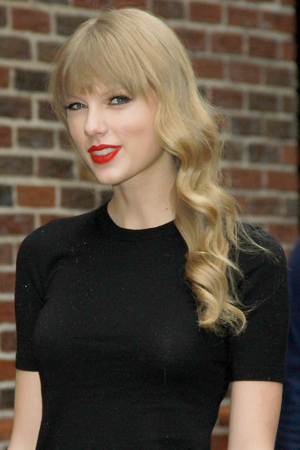 Is Taylor Swift’s “We Are Never, Ever Getting Back Together” about Glee’s Cory Monteith? The Red singer stopped by Ellen DeGeneres’ talk show on Thursday to promote the new album, but all the talk show host really wanted to talk about was Swift’s romance with Zac Efron.

Wait, what? No, the two never dated, but DeGeneres apparently loves to make the singer and actress sweat when it comes to the plethora of famous dudes she’s dated since entering show business. At one point, Ellen decided to ask the now-ex of Conor Kennedy who her latest song is about. And to answer, Ellen gave the 22-year-old blonde a cowbell to ring when the correct suitor came up.

“I don’t know if I can do this, this is the one thing I have! This is like the one shred of dignity that I have,” Swift said, adding that she doesn’t want to reveal her ex-boyfriends because “they’ll send me angry emails and I don’t want to get them!”

Some of the photos were jokes: Danny DeVito, Rob Lowe — but Swift became visibly nervous and silent when a photo with Monteith was flashed onscreen. She tried to play it off, but we’re thinking there was more to that relationship that we thought.

“Stop it, stop it, stop!” she added, looking like she was about ready to cry. “This makes me feel so bad about myself. Every time I come up here you put a different dude up on the screen. It just makes me really question what I stand for as a human being. There’s never been two guys on the screen two visits in a row. It’s sad.”

Wonder what she’s going to write about Conor? Ethel Kennedy must be totally heartbroken right now.