President Barack Obama has finally explained why Donald Trump has it in for him — it all dates back to their childhood rivalry in Kenya, he joked. 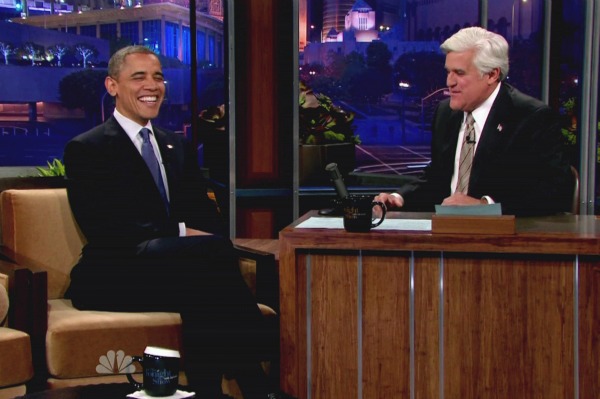 Donald Trump’s so-called huge announcement about Barack Obama yesterday was a dud, but it left many wondering why the real estate magnate has such a beef with the prez. Finally, we have an explanation.

“This all dates back to when we were growing up together in Kenya,” Obama kidded Wednesday on The Tonight Show with Jay Leno, showing a great sense of humor by tying Trump’s birther beliefs into the joke.

“We had constant run-ins on the soccer field… He wasn’t very good and resented it. When we finally moved to America, I thought it would be over,” he said.

Donald Trump had crowed for a week that he had a major announcement that could derail Obama’s chances at reelection — but in a very anti-climactic video released yesterday, all the Celebrity Apprentice host had to offer was a bribe of $5 million in exchange for college application, transcript and passport records in a weak attempt at proving his ridiculous theory that the president was not born in the United States.

Michelle Obama: We are better off than we were four years ago >>

“Here’s $5 million, a tremendous amount of money,” he said. “All he has to do is show some papers.”

No matter, though. The prez might not have Trump on his side, but Barack Obama knows he already secured one very important vote.

“Michelle told me she voted for me,” he said.