So, we already know that Oliver Queen has a hit list of local villains a mile long, but what happens when he runs into another assassin with the same names on his hit list? Poison bullets and chaos. 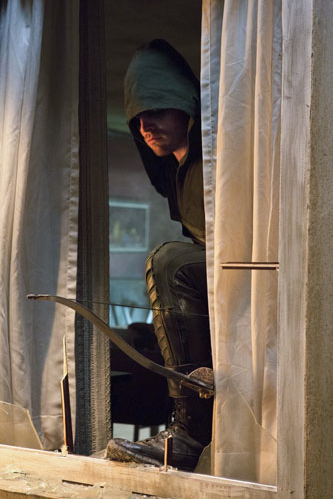 James Holder, a corrupt businessman whose cheap fire alarm system in the low-income housing building he owns led to the death of many residents, was on Arrow’s (Stephen Amell) chopping block this week.

But before he could give Holder a chance to right his wrongs, a sniper firing bullets filled with poison pumped a couple into his crooked heart.

The secret sniper? Deadshot. He has a real name, but this name really seems to sum up his personality. Speaking of names, he has all the names of the men he’s killed tattooed across his chiseled arms and chest. Creepy.

He also has been hired by Warren Patel to take out some of these businessmen, and Ollie learns that the next target will be at his family’s company’s auction.

As if having an incredibly accurate poison bullet sniper wasn’t enough to deal with, Ollie is still having some really big problems with his sister. Her drinking is getting out of hand, and she even got arrested for breaking and entering.

Oliver tries to encourage his mom to discipline her, so she grounds her for two weeks. But, the sentence hardly sticks. The next thing he knows, he sees Thea (Willa Holland) drunk at a nightclub where she tells him, “You’re not my father, you’re barely my brother.” She also decides to tell him that his best friend and his ex-girlfriend have been seeing each other over the past five years. This girl really knows how to shoot an arrow through his heart.

Tommy (Colin Donnell) does seem to be a better guy than he appeared at first. He really does care if he’s hurt Oliver (although, everyone knows Oliver pulled enough crap before he disappeared that he doesn’t really deserve their consideration). After Oliver tells him it’s OK, Tommy goes to Laurel (Katie Cassidy) and tries once more to persuade her to date him. She’s turning him into a one-woman man and he’s going to prove it to her. You might actually root for their relationship to work if she wasn’t still so massively in love with Ollie.

Another big thing on Oliver’s plate this week was buying the warehouse space where he uses the basement as his superhero secret lair. He plans to turn the the upper levels into a nightclub. Everyone feels like this is a risk because the building’s on the wrong side of the tracks, but it’s really only Dig (Paul Ramsey) who thinks there’s more than meets the eye. And he also doesn’t hide his great disdain for Oliver, which kind of makes me like him more. 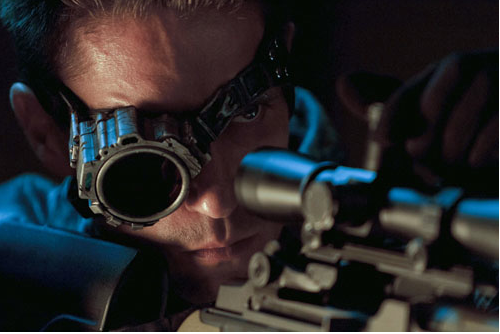 It’s the night of the company auction and Oliver, as Arrow, restrains Detective Lance (Paul Blackthorne) and tells him about the upcoming hit and that he should beef up his security. Sure enough, Deadshot shows up to wreck some havoc. Detective Lance and Arrow are able to keep the situation under control and Deadshot takes an arrow through the eye spectacle. Unfortunately, Dig took a bullet just before Arrow got to Deadshot.

Back at his lair, Arrow gives Dig an antidote for the poison; the bullet wasn’t enough to kill him. Then Arrow takes off his hood and reveals to Dig who he really is. It’s really just the polite thing to do. I mean, if this guy’s going to be taking bullets for you, it’s kind of common courtesy to say, “Oh yeah, I’m the hooded vigilante and we’re gonna run into a lot of bad dudes who are going to shoot at you.“

Willa Holland sure seems to have things together a bit more than her character, Thea. And she seems a little nicer, too! Check out this clip of Willa talking about Thea’s story and what may be in store for her character.