Hot cowboys. Country queens in couture. Unforgettable performances. The 46th Annual Country Music Awards is upon us! The show, hosted once again by twangy twosome Brad Paisley and Carrie Underwood, is slated to air Nov. 1 at 8/7c on ABC — and SheKnows will be right there on the red carpet to bring y’all the complete country experience. 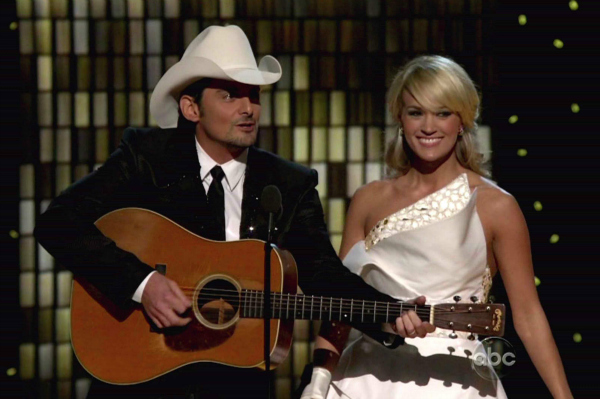 If you’re nursing an achy-breaky heart because you couldn’t wrangle up a ticket to country’s big night, chin up: Not only can you catch the CMAs live on ABC Nov. 1 at 8/7c, but SheKnows’ own entertainment correspondent Lauren Kelly will be streaming live from the red carpet from 4:00 to 6:30 p.m. Central to bring you interviews with some of country’s hottest stars.

This behind-the-scenes peek is sure to deliver a juicy moment or two. At the 2012 Emmys, Tom Hanks awkwardly offered SheKnows correspondent Whitney English 20 bucks… does Lauren have an inexplicable celebrity interaction in her near future? With the roster of big-name talents who’ll be stopping by Lauren’s red-carpet perch, anything is possible. She’ll be drawling about fashion, nominations and more with:

We’re also keeping our fingers crossed that country music newcomers Jana Kramer, Brett Eldredge, The Farms and Hunter Hayes will swing through for a friendly chat.

So, stellar SheKnows interviews aside, what else will the night hold? Last year at the CMAs, Lionel Richie hit the stage with country crooners like Darius Rucker, Modern Family’s Eric Stonestreet made jokes about Taylor Swift’s love life and Miss Swift got the last laugh by walking away with the coveted Entertainer of the Year award. Here are a few things we’ll be keeping a watchful eye out for:

Who will rock the red carpet?

Last year, hostess Carrie Underwood literally sparkled in a stunning, gold-beaded Reem Acra gown. Laura Bell Bundy, on the other hand, defied logic in a royal blue pantsless, caped Skating With the Stars-esque ensemble. Who will shine (or sink) at the 46th Annual CMAs?

What hunk will T. Swift be escorting?

‘Twas a fairytale romance in the making — country music’s sweetheart, Taylor Swift, canoodling with 18-year-old Conor Kennedy. But, uh-oh, sources recently started spreading rumors that Swift has also been getting cozy with ex-governor Arnie’s son, Patrick Schwarzenegger. Will the star put relationship trouble rumors to rest by showing up with Conor? Or will she set tongues wagging by bringing Pat?

Up for the night’s most prestigious award — Entertainer of the Year — CMA nominee Jason Aldean has been burning up the Billboard charts lately. What proved more incendiary, however, were photos of the married Aldean kissing Idol hopeful Brittany Kerr in a bar. Will Jason’s wife, Jessica, put on a brave face to support her recently sleazy hubs?