Mitt Romney isn’t about to show off pale skin on the campaign trail. The GOP presidential nominee is a fan of regular spray tans, according to a source. 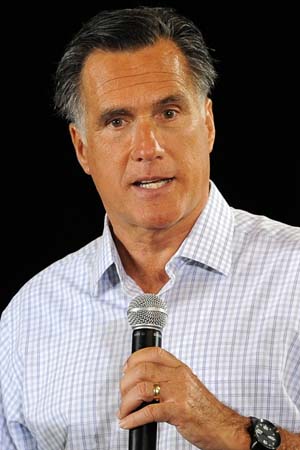 Forget Donald Trump and his tired “bombshell” announcement that turned out to be nothing more than some rehashed Birther drama. The real October surprise in this presidential election is that Mitt Romney gets spray tans — and lots of them.

What? Romney’s skin isn’t naturally so bronzed and glowing? Apparently not. The former Bain Capital executive routinely gets $500 worth of color shellacked onto his skin on a regular basis, according to BuzzFeed.

Obama vs. Romney: What they think on foreign policy >>

“The Republican nominee has made a habit of spray tanning before major speeches, debates, interviews, and other events that have a chance of getting wide TV coverage,” a source told the website.

You’ll never see him at your local salon, though: He opts for in-suite spray-downs. As for who pays for the regular beauty treatments? Romney does and that’s why the treatments don’t appear on his public campaign finance reports, according to the source.

“Not true,” spokeswoman Andrea Saul said when asked about the claim. At least one celebrity stylist thinks he’s getting them, though.

“Oh, for sure he had a spray tan,” Jimmy Coco, a celebrity tanner from Los Angeles, told BuzzFeed. “I just see the sort of red hue that you get from some of the spray tanning places… The ears are white. That is a giveaway. If you look at Obama, he’s all one tone. A lot of times, what they do when they’re giving a spray tan, they’ll put a cap on and their cap will cover the ears.”

We think Romney got the idea from his favorite television personality, Snooki. The woman with the “sparkplug personality ” — his phrase, not ours — now prefers the look over regular tanning. She’s even hawking her own line of sunless tanners, Snooki by Nicole Polizzi, at Supre Tan.