Texture — Taylor Swift knows texture. She can describe details and make her struggles vivid, and successfully does so with the heartwarming track “Begin Again.” 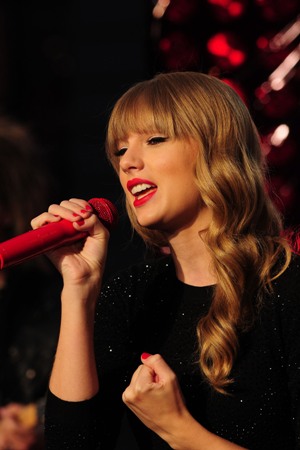 What award isn’t Miss Taylor Swift up for this year at the 2012 Country Music Awards?

She’s got three solid nominations for:

Is she the reigning queen this year?

Depends on what you’re looking at. With the CMAs? No, but she only trails behind by one nomination, when compared with the four nods Blake Shelton and Miranda Lambert have, and the five Eric Church has.

With album sales? Absolutely. Her album, fiery RED smoked the competition. Dropping earlier this month, Billboard quoted her first day sales upward of 500,000 units. Even MTV has determined she is the first woman in the past two decades to “have two albums cross the million unit mark in a single week.”

“Begin Again,” the object of my affections and focal point of my review, is a touching ballad by Swifty. It’s not a busy song, with simple instrumentals and a focus on her beautiful, angelic country voice. The delicate guitar playing throughout, accompanied by a soft-spoken Taylor, made for a bittersweet song about moving on from a difficult past love and falling into the arms of a new one.

I couldn’t help but think about “White Horse,” another similar song of hers in sound and subject. “Begin Again” is almost a continuation: moving, heartfelt, and soothingly slow — almost with a restorative charm as the words she spoke unfolded. This is not a raging, emotionally charged breakup song.

It reflects the stages after, when you’ve accepted that it’s over and you can do better, and you have the accompanying need to move on. It involves what seems to be a damaging relationship that left her scarred and insecure, and the new love interest provides her a startling new perspective on what love really should be.

“But you throw your head back laughing like a little kid,
I think it’s strange that you think I’m funny cause he never did”

Her voice is airy but saddened, and achingly fragile. She maintains an overall sense of hope, as a mysterious new man reinstills faith in a new beginning:

“I’ve been spending the last eight months
Thinking all love ever does is break and burn and end
But on a Wednesday in a cafe, I watched it begin again”

Typical of a Taylor Swift song, it sounds personal. And personally, I love this song. The music video was just released this past Tuesday. Enjoy!