Danny Wallace’s Charlotte Street is a charming debut novel about a boy who meets girl, loses girl and sets out on a heartwarming journey to find “The Girl.” It’s a laugh-out-loud romantic comedy and our latest pick for a must-read. 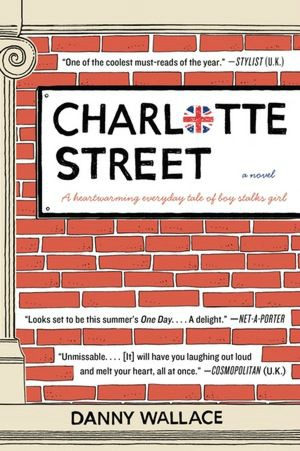 Danny Wallace is a British filmmaker and award-winning journalist and has written the books Join Me and Yes Man. The latter was made into a feature film starring Jim Carrey. And now he’s written his first novel, already a huge hit in the UK and sure to be wildy popular in the United States as well.

The main character’s name is Jason Priestly, but he’s not to be confused with that guy from 90210. He’s just quit his job as a teacher to become a journalist. But so far, he’s only writing snarky reviews of cheap restaurants for a free newspaper. He lives above a place everyone thinks is a brothel, and he’s just found out — on Facebook — that his ex-girlfriend — she left him — is engaged. Needless to say, Jason Priestly is in a serious rut.

While he thinks of his own recent pathetic Facebook status (he was eating soup), he spots her: the woman who’s about to change his life. And so begins a romantic journey that will command the attention of any fan of romantic comedies. Jason sees her lugging too many packages and offers to help. She smiles, and in that moment of heart pitter-patters and butterflies, he feels something. Then her cab pulls away, and he thinks the universe may have just played another cruel joke. Until he realizes that she dropped a disposable camera. And now he might have a link to her.

But should he develop the film?

Yes, because she could be the woman he’s meant to spend the rest of his life with. And he can’t spend his life wondering, What if?

And so begins the heartwarming journey that reminds me of the rom-com Serendipity, starring John Cusack and Kate Beckinsale. (A must-see!)  Jason’s socially awkward roommate, Dev, helps him piece together clues to try to find the woman they can only call “The Girl.” Along the way, there’s an unforgettable cast of characters who will make you LOL as Jason searches for love.

So does he find “The Girl?” You’ll have to read Charlotte Street to find out!