Here we go again: Donald Trump says he has some big dirt on President Barack Obama. The big news? Supposedly The Obama’s considered divorce at one point. 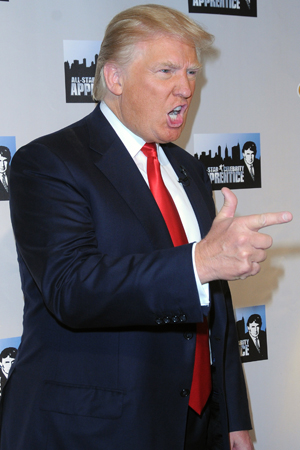 Donald Trump might not be running for president, but he can’t resist inserting himself into the fight for the White House. The Apprentice creator revealed Monday that he has some big bombshell about President Obama.

“I’ll be making a major announcement on President Obama next week — stay tuned!” he wrote last week, adding on FOX and Friends that “it’s to be announced probably on Wednesday. But I have something very, very big concerning the President of the United States.”

Is this going to be the much-anticipated “October Surprise” that will guarantee Mitt Romney a spot in the White House come January? Don’t bet on it. According to one financial expert, the big announcement will be that the Obama and wife Michelle Obama considered divorce at one point.

“High above the Alps my Gnome has heard that Donald Trump will announce that he has unearthed divorce papers between the Prez and his wife,” frequent CNBC contributor Donald Kass tweeted Tuesday afternoon.

Wow… some bombshell, considering over 50 percent of marriages in the United States end in divorce. Trump’s even had a couple of his own, so to say this might change the race is ridiculous.

This isn’t the first time Trump’s tried to take down Obama. If you’ll remember, The Donald had tons of “researchers” out in Hawaii looking for the official birth certificate. Trump promised he had new information about it, but then Hawaii released the President’s official document of birth. Surprise! It showed he was born in — wait for it — Hawaii.

So yeah, we’re not expecting a lot of news to come out of this. Trump is great at generating publicity, but that’s about it. Oh, and we can’t take someone seriously in politics when he tweets about the Kristen Stewart and Robert Pattinson cheating scandal.

“Robert Pattinson should not take back Kristen Stewart. She cheated on him like a dog & will do it again–just watch. He can do much better!” Trump tweeted on Oct. 17, adding that he’s “never wrong.”

“Robert I’m getting a lot of heat for saying you should dump Kristen but I’m right. If you saw the Miss Universe girls you would reconsider,” he added a couple days later.

“Everyone knows I am right that Robert Pattinson should dump Kristen Stewart. In a couple of years, he will thank me. Be smart, Robert,” Trumped added on Oct. 22 admit dozens of tweets about the debate. Is it just us or does he seem as obsessed with Robsten as he is with Obama?