Kris Jenner totally doesn’t understand what’s the “big deal” about showing off her ta-tas on Twitter. 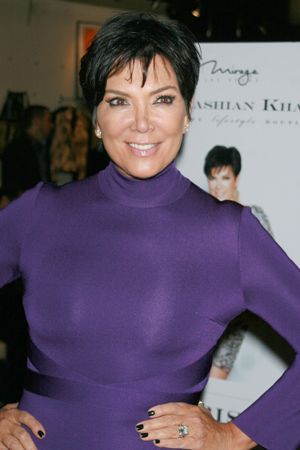 We don’t believe for one second that Kris Jenner didn’t know her nipple was showing when she tweeted a photo of her Wonder Woman Halloween costume over the weekend.

Why? Well, her family has a reputation for seeking out publicity whenever possible. Plus, it’s still posted.

To be fair, she might not be able to feel the breeze since she just had her implants redone and all. Multiple breast augmentation surgeries can affect the nerves. But, that’s probably not why.

The Kardashians have built an empire with their special brand of TMI. It helped Kim Kardashian earn international stardom on the back of her sex tape — and it helped Khloe Kardashian land a job hosting The X Factor.

But, is the family power fading? Jenner is reportedly trying to get Kim and sister Kourtney Kardashian their own hosting gigs.

“With Khloe getting her dream job as an X Factor host, Kris thinks anything is possible now, a source close to the family revealed,” according to RadarOnline.

“As soon as the contract was signed, Kris immediately got on the phone to various TV production companies to find out if there was something that Kim and Kourtney could work on,” the source continued. Their dream jobs? “Kim on America’s Next Top Model and Kourtney on Project Runway.”

“Because Kourtney was more prominently involved with working on their Dash clothing label, Kris believes she should be on a show like Project Runway,” the source added.

“Kim is great in front of the camera, has lots of experience modeling and doing fashion shoots, so Kris is desperate for her to get involved as a judge on a show like America’s Next Top Model.”

Kim might love fashion, but the fashion world doesn’t like her. Plus, she has as much personality as a dead cat. Will it happen? Jenner will do her best to make her dreams a reality, one nip slip at a time.