Glee star Lea Michele was spotted over the weekend with that telltale bump under her baggy shirt. Will she be a mom soon? Not so fast. 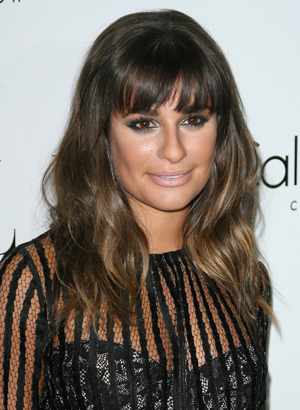 You aren’t really famous until you’ve been accused of a secret pregnancy. Glee’s Lea Michele finally joined that club on Monday when rumors of her supposedly impending child with co-star Cory Monteith took over the interwebs.

The reason for the rumor? She was spotted leaving a nail salon with a large bag and a tiny stomach bump under her T-shirt. We won’t be welcoming any Glee babies any time soon, though.

“My first pregnancy rumor!” she tweeted on Monday. “I’ve finally made it! :)”

Michele is nurturing a new little bundle of joy, though — she’s recording a new solo album.

“At the studio right now at my first recording session for my solo album!! I’m so happy and can’t wait for you all to hear this record!!” she wrote last week.

She’s pretty mum on the details of the album, though.

“It’s a pretty slow process right now, so I think we are figuring it out as we go, but I do want to make a pop album rather than a Broadway standards album,” she told Women’s Wear Daily recently.

Glee finale tattoo for Lea Michele? Call up the fam! >>

She just can’t get away from singing, it seems. Besides Glee and her album, she’s also starring as the voice of Dorothy in the upcoming Dorothy of Oz.

“I loved [The Wizard of Oz] growing up. This is more modern and fun,” she recently told USA Weekend of the animated feature, due out in 2013. “I recorded the whole film by myself. It’s really fun. You can go to work in your pajamas!”

Sounds like there’s no room in her schedule for a baby!