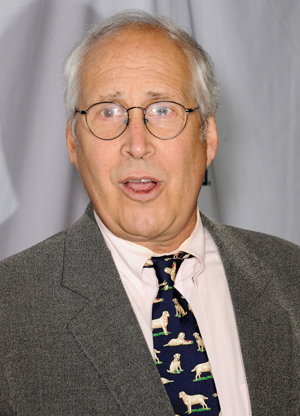 It sounds like Chevy Chase’s legendary bad attitude on the set of Community is only getting worse. The veteran actor and comedian reportedly used the “n word” on set during a recent day of filming. Why? He thinks his character is getting too racially insensitive as the show goes on.

Chase realized what he’d said and apologized to the cast — including Yvette Nicole Brown and Donald Glover — immediately, according to The Hollywood Reporter. The outburst wasn’t directed at his African American castmates, but it understandably struck a nerve.

“I have the gift of walking away,” Brown tweeted afterward. “Always have.”

We have to wonder why Chase is still on the show. The former Saturday Night Live star makes no secret of his disdain for working on television. He even bashed the show during an interview promoting the Season 2 DVD release.

Joel McHale shows us how to become a viral sensation >>

“The hours in this kind of show are not commensurate with the actual product. The hours are hideous, and it’s still a sitcom on television, which is probably the lowest form of television,” he told The Huffington Post UK. “That’s my feeling about it.”

He says he loves his cast mates, but his relationship with showrunner Dan Harmon is quite strained, judging from a profanity-laced voice mail leaked earlier this year.

“If you want me on this f*****g show again, I got news for you, I don’t want it! It’s just a fucking mediocre sitcom! I want people to laugh, and this isn’t funny,” Chase screamed in the clip obtained by Celebuzz.

“It ain’t funny to me because I’m 67 years old, and I’ve been doing this a long time. I’ve been making a lot of people laugh — a lot better than this.”

Do you think Chevy Chase should stay on Community?