It may have topped the box office this weekend, but Paramount Pictures may be more alarmed by the numbers than by any sort of Paranormal Activity in the near future. 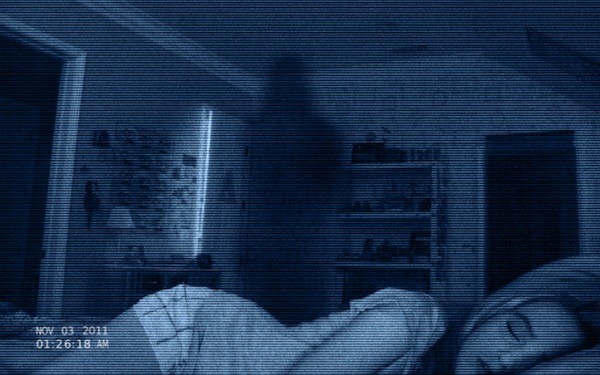 Paranormal Activity 4 may have reeled in an estimated $30 million (according to Rentrak) in its opening weekend, but viewers agree the franchise has just about sucked all the suspense out of the series. What’s more scary is the lineup of movies hitting theaters this coming weekend, which will surely kick Paranormal from its top seat.

Ben Affleck has infiltrated Hollywood in too many ways to count. On screen he’s playing an integral role in the recovery of six U.S. diplomats from Tehran, under the cover of a faux-filmaker alias, in the film adaptation of the 1979 Iran hostage crisis. In reality, Affleck and Argo managed to maintain the number-two spot in this week’s box office.

Hotel Transylvania came in at number three with $13.5 million, telling the kooky tale of Dracula, brought to life with the voice of Adam Sandler.

Taken 2 took a close fourth (see what I did there?), with an estimated $13.4 million. The only thing I find suspenseful about this gig is waiting for the moment when I figure out how this film continues to take your money with such a lack of plot. All the while, Taken 3 is in the talks.

Tyler Perry as Alex Cross survived the weekend at number five, and having landed pretty decent reviews, there’s still time for the film to grow some buzz in the coming weeks. It’s hard to beat Morgan Freeman as Cross in 1997 and 2001, though.

Ethan Hawke and crew scored some $9 million this weekend with their supernatural horror, Sinister.

Here Comes the Boom got slugged, moving down to number seven on the list. We’ll see if Kevin James can fight his way back to the top before all’s said and done.

Pitch Perfect got pitch slapped, dropping down to number eight, but still landed $8 million this weekend, proving again that it ain’t over til’ the fat lady sings.

Frankenweenie is trying to come back from the dead, but at number nine, things are looking a little rough. I’m no expert, but my guess is this one could have skyrocketed had Tim Burton persuaded the producers to hold off a little longer on the release. Either way, this will surely gain Halloween audiences as the holiday gets closer.

Bruce Willis and Joseph Gordon-Levitt fall at number ten with Looper, but $4.2 million isn’t bad for the weekend, considering the movie came out almost a month ago.