Chris Brown is under fire for his homophobic attitude again. A now-former fan claims that the singer threw slurs at him after he antagonized the star for not signing an autograph. 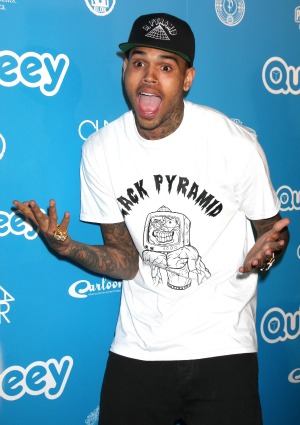 Chris Brown is getting mouthy again. The singer allegedly got into it with a fan after refusing an autograph, and threw a homophobic slur at the openly gay man.

Lucas Peter told RadarOnline that the trouble started when he approached Brown for an autograph at the Arclight movie theater in Hollywood. From the way Peter himself explains it, he started playing dirty when Brown refused — and he definitely got a rise out of the star.

“The movie let out and I saw Chris come out the front door, sort of semi-running. I approached Chris and asked him to sign my CD cover,” Lucas told RadarOnline.com.

“His bodyguard stopped me and said Chris wouldn’t be signing, so I told him Rihanna signs all the time. That’s when Chris stopped in the garage by the parking pay stand and yelled ‘f****t’ at me.”

Here’s where it gets good. Rather than walk away, Peter had to go and bring up that whole beating-the-crap-out-of-Rihanna thing.

“I walked over to where Chris was getting in the elevator and called him a wife beater and asked him if he was going to beat Rihanna again,” he claimed.

Jay-Z tells Chris Brown he will “end his career” >>

This isn’t the first time Brown has been accused of being a homophobe. In 2010 he got into a Twitter beef with Raz-B and fired off a graphic anti-gay tweet. In 2011 he called a bunch of photographers “gay” after accusing them of calling the cops on his illegally parked car.