It’s dangerous to dig up the past, but Emily’s always carrying that shovel around. Will she learn her lesson before someone really gets hurt or just unleash another monster from the grave? 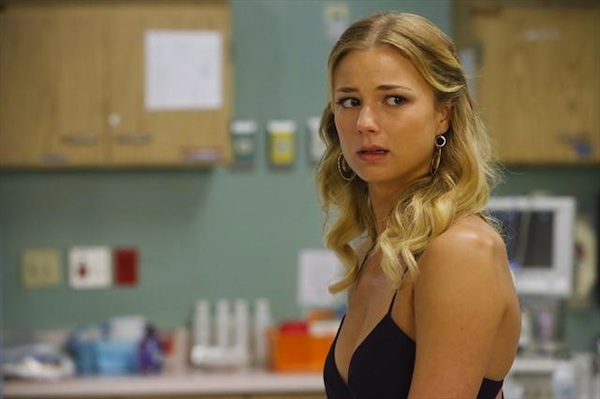 How twisted can one plot get? Emily (Emily VanCamp) has her hand in so many webs that she can no longer control the outcome of any of them. She’s witnessed some shockers lately, but nothing quite as big as what went done this week.

First off, despite the fact that she is entirely responsible for the progression and downfall of Amanda (Margarita Levieva) and Jack’s (Nick Wechsler) relationship, she still continues to use Amanda as a pawn in her scheme to bring down Victoria (Madeline Stowe). This time, she wants Amanda to coerce Victoria into admitting that she knows what happened to Kara Clarke (Jennifer Jason Leigh), Amanda’s real mother.

Unfortunately, Emily doesn’t realize some secrets should just stay buried and dead. But, she never puts her shovel to rest. When Amanda finally pushes Victoria to her limit, she reveals the skeletons in Kara’s closet, and they sure aren’t pretty. Kara tried to kill Amanda when she was a little girl, and that’s why she was sent away and her father said she was dead.

Immediately after the tragic truth is revealed, Victoria pushes Amanda off the balcony onto the perfectly polished tile floor. It was an accident, but still, Victoria was way too rough on a woman so pregnant she’s about to pop any second. 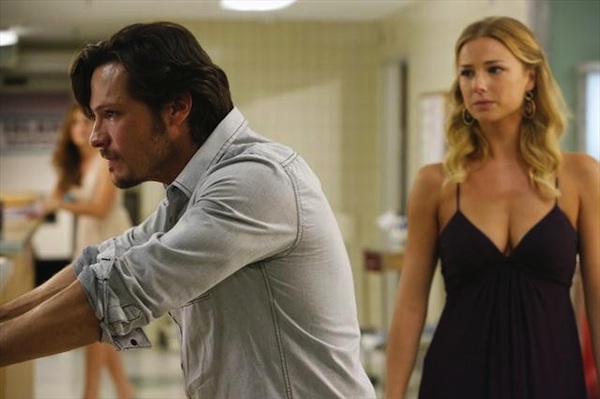 Amanda gives birth to her son, but he’s not getting enough oxygen, so he has to be put in an incubator, and Jake can’t even hold him. And Amanda is now in a coma; no one knows if she’ll recover.

Meanwhile, Aiden (Barry Sloane) goes back to track down Kara, but she manages to get one up on him with a taser. She ties him up and leaves him for dead while explaining to him that the White-Haired Man was her husband. He escapes and tries to call Emily to warn her that her mother is a crazy woman and on the loose, but Emily never gets the call.

Instead, Kara hears of Amanda’s accident on the radio (good thing she wasn’t listening to her iPod or Spotify like the rest of us or that plot line wouldn’t have worked out) and goes to the hospital. Emily walks around a corner and sees her mother sitting with Amanda and suddenly those dirty buried memories come flooding back. She recalls that her mother tried to drown her when she was just a little girl. She leaves the hospital without confronting Kara.

Although she tries to push him away, Aiden comes to her rescue and forces her into his arms until she breaks into tears. As “bad” as Emily is, it was still heartbreaking to watch her cry. I think I have a lesson to share with Emily here: Revenge isn’t always the answer. Sometimes you just have to let the dead stay dead. At least that’s what The Walking Dead taught me.

Can you imagine someone else in the role of Emily Thorne? It almost happened! Here’s a clip of Emily VanCamp talking about how she landed the coveted bad girl role.