Some of the most beautiful and talented ladies will walk the red carpet on Nov. 1 for the 46th Annual Country Music Awards. Unfortunately, they are not always fashion forward, and sometimes they are fashion flops.

This year’s Country Music Awards (CMAs) kick off Nov. 1 in Nashville, Tennessee, and SheKnows will have all of the excitement from the red carpet, live! It will be a great opportunity to see the fashions and accessories firsthand and to judge who is best dressed or worst dressed that night. To gear up for country music’s big night, let’s take a look back at the worst-dressed performers in recent memory. 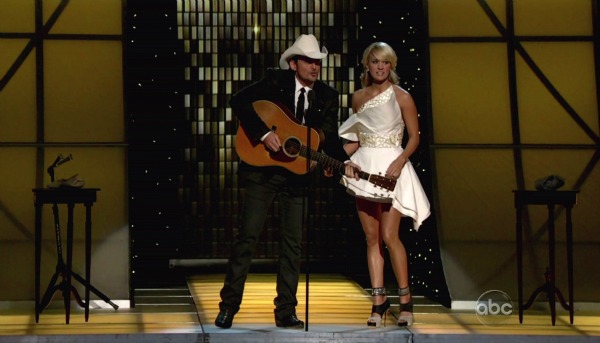 Underwood is clearly country music’s sweetheart, and she rarely misses in her fashion choices. However, during the 2011 CMAs, she had a series of wardrobe changes to go along with her hosting duties. This white, asymmetrical Cengiz Abazoglu creation was a freak error in judgment for the “Jesus Takes The Wheel” singer. While it does show off her great legs, it doesn’t do much for the rest of her lean body.

Sometimes it is hard to remember that Rimes started out in country music, given the fact that over the last few years, she has been known for her cheating scandal with now-husband Eddie Cibrian. In 2009, she busted out a come-hither look that went awry, with eyes blackened like a raccoon’s and shoes that should have stayed in the closet. She really looks much healthier with a little meat on her bones, too. 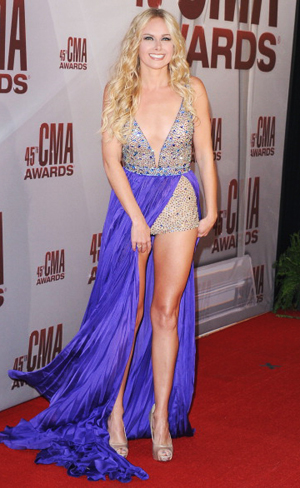 This one might take the cake for tackiest red-carpet dress in recent memory. The Broadway-star-turned-country-singer seemed to have confused country music glamour with Las Vegas showgirl. The plunging, rhinestone leotard surrounded with a purple-wrapped skirt was all wrong for such a lady. The gals at Go Fug Yourself summed it up best with, “Yeah, you’re not understudying for the Reese Witherspoon part in a regional theatre adaptation of Water for Elephants.”

The “Unwritten” singer not only wore two outfits at the CMAs in 2011, she also took home the trophy for Worst Dressed twice in one night. Bedingfield walked the down the red carpet looking like Melanie Griiffth straight off of the set of Working Girl, and then she changed to a Christian Siriano number that looked like the fur of a thousand Muppets. Someone needs to hire a new stylist, stat!

Before she was officially Mrs. Blake Shelton, the “Over You” CMA nominee experimented with her curvy figure and red-carpet look. While the blue color looks great on her, the dress is ill-fitting, and it looks like she robbed a jewelry store in at the CMAs in 2008. Lambert has done a great job of refining her look over the last several years, so thankfully, this outfit is just a distant memory.