Brad Paisley and Carrie Underwood are at it again, playing hosts for the 2012 CMAs. Will the dynamic country duo, who have hosted four times previously, pull it off yet again? 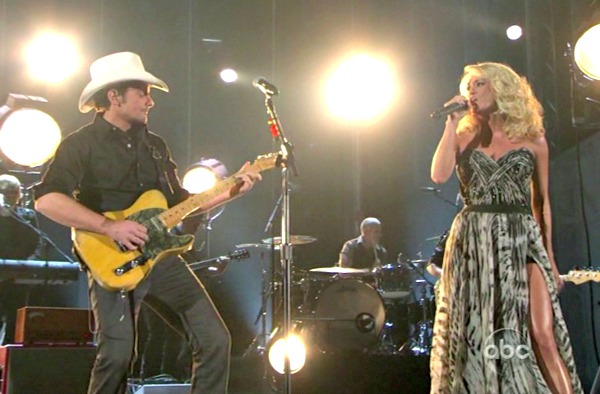 The 2012 CMAs mark Brad Paisley and Carrie Underwood‘s fifth time taking on hosting duties. Thanks to plenty of practice both at past events and in between awards shows, the pair has hopefully gotten their schtick just right.

“We’ve definitely been keeping our eyes open to all of the stuff that’s going on. To see who we can pick on, I guess,” Carrie Underwood joked recently of gearing up to take the stage and fire off a few wisecracks come Nov. 1.

Of working with Brad Paisley, whom she sang with on “Remind Me,” the wife of hockey player Mike Fisher added, “We’ve figured out our roles, I think — who we are and what characters we play.”

Lucky for country music fans, there’s little chance Paisley and Underwood will flop a la Anne Hathaway and James Franco. Unlike the first-timers’ fiasco at the Oscars in 2011, the crooning pair have a history of success.

HitFix named the duo one of the best parts of 2011’s show, praising Paisley and Underwood: “[They] have a fun, energetic brother/sister banter and were thoroughly charming. They brought to life often tired jokes with nice timing and a playful willingness. As one point, Paisley joked about hosting the Oscars, but if the Muppets aren’t available, the Academy could certainly do worse.”

Check out a clip of Brad Paisley and Carrie Underwood keeping their hosting skills sharp!

Catch the pair in action for real when the 2012 CMA Awards commence on Thursday, Nov. 1. Take in the live red carpet action with SheKnows Goes to the Shows starting at 5/4c!

How do you predict Brad Paisley and Carrie Underwood will fare at the 2012 CMAs?