Springsteen and Clinton dodge the streets of Philadelphia and parade through Parma, Ohio in the name of Obama. 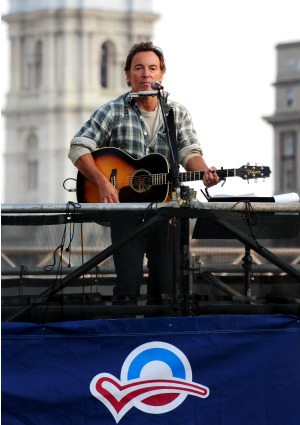 The reviews are in from Springsteen and Clinton’s Ohio stop yesterday, and so are the pictures!

Fresh off the heels of Tuesday’s heated debate, the Boss and former President Clinton headed to Parma, Ohio on a mission to rally the swing state in favor of an Obama vote.

Springsteen, famous for his Americana anthems and threads of homegrown hoorah, graced the Cuyahoga Community College West Campus Recreation Center with a free show, in conjunction with his own words of wisdom concerning the ballot.

This campaign marks a return to political activism, as Springsteen is attributed to leading the first Obama go-round back in 2008.

Whether their attempts shifted the political tide in Ohio is something we’ll just have to wait and see.

Surely, “No Surrender,” “The Promised Land,” “This Land Is Your Land” and “Thunder Road” amidst the set couldn’t have hurt Obama’s chances.

Springsteen and Clinton left Ohio shortly after the show and hit the road to Ames, Iowa where Springsteen furthered his cause again a few hours later.