Jason Aldean has some advice for country purists who send him buckets of haterade for including rap in his tunes — and it involves spending your money elsewhere, because he doesn’t need it. 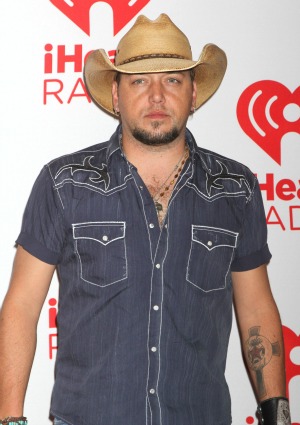 Ludacris on a country song? Sounds crazy, but singer Jason Aldean is all about it — and if you aren’t, then that’s your problem, not his.

The “Night Train” singer told Charlotte’s The New 1037 that other people’s taste in music doesn’t concern him.

“Go buy a pure country record,” he said. “If we all sounded the same it would be boring. If you like what I do, go get the record. If you don’t? Buy somebody else’s record.”

“I respect their opinion, but it’s not going to change the way I play my music.”

“I love working with other artists,” he said. “It’s fun for me, and also fans.”

Aldean collaborated with two other country stars, Luke Bryan and Eric Church, for the single, “The Only Way I Know.”

“Luke and I are really good friends,” Aldean explained, and “he and I have two completely different personalities. He comes in and never stops talking, and I’m the complete opposite.”

“…the more I listened to [the song], the more I thought we could bring somebody else in, and Eric was the first guy that came to mind. I felt like it would be a really cool thing for the album.”

The title “Night Train” brings to mind the Guns N’ Roses hit of the same name, but none of the same meaning. While the Axl Rose tune was actually about drugs, Aldean’s is much more family friendly fare.

“‘Night Train’ to me kind of makes me think about a couple years ago [when] I was on a bus with 12 other guys and I was pulling one trailer,” he explained. “Now I’m backstage and I look around and we have eight or nine buses and eight or nine semis. And when we pull out of the venue, that’s what it looks like — it looks like a freight train going down the interstate.”

Aldean’s entire album Night Train is available in stores and on iTunes.