Elena’s so hungry she could eat a horse, but even that won’t satisfy these hunger pangs.

Stefan (Paul Wesley) is on a mission and in complete denial. He knows Elena (Nina Dobrev) has to feed to survive, but he doesn’t want her to feed on humans and lose her humanity. Damon (Ian Somerhalder), on the other hand, would prefer that she go straight for the vein, so they can just get it over with. Elena sides with Stefan and they go hunting for some tasty deer blood.

In the woods with her heightened vampire senses, Elena can’t keep her hands off Stefan. Just when it starts to get steamy and we’re getting to the good stuff, Elena bails to puke up the animal blood. Just like a lady though, she does it in private and doesn’t tell her man.

In town, there’s a new vampire hunter, Connor (Todd Williams), who is investigating the fire that killed the council members. He forces himself into the Mayor’s house and shoots Tyler (Michael Trevino) with specially carved bullets. Tyler is able to get away, but now everyone is on edge, especially with the upcoming funeral for the council members.

When Elena’s hunger pangs won’t quit, she calls Damon for help and he is more than happy to assist. He allows her to feed from him in a very intimate scene. There was even some hair stroking. It was hot and romantic, and I feel weird about it. Unfortunately, even vampire blood isn’t sitting well. She winds up vomiting all over the church’s basement bathroom at the funeral. It looked like a scene from Texas Chainsaw Massacre in there.

To the rescue again, Damon brings her some non-blood spattered clothes and a bag of blood from the hospital. She takes a swig and immediately spits it out. She can’t eat anything and now she’s beginning to starve. But, she still refuses to feed on a human.

Stefan catches Damon and Elena together and confronts Damon. The older Salvatore brother seems to get a little too much pleasure out of telling Stefan that Elena fed on him. I don’t know exactly what it translates to in vampire culture, but it sure looked like cheating to me. 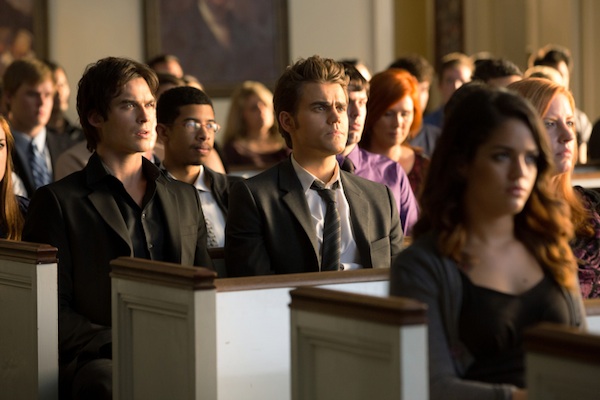 At the funeral, Connor stabs April Young (Pastor Young’s daughter) and ties her up on the balcony so that her blood drips down to the floor. He sets up his rifle and just waits for one of those bloodsuckers to make a move. Luckily, they are aware it’s a trap. But, poor Elena is losing her mind and has to be held back from running after the blood. So, Matt lets Elena feed from his neck and makes it look like she’s crying into his shoulder. Way to give back after she saved your life, Matt.

Tyler goes to the podium and takes a bullet for the team… for the second time. He’ll be fine. Everyone runs out of the church, and Damon chases down Connor, but he gets away. Caroline and Elena save April (even though Elena really just wanted to eat her) and help her to believe everything is going to be OK.

At the end, Elena is overwhelmed with grief because of all the loss their town has suffered. Stefan gets the friends together to release wish lanterns for loved ones who have died. He really is quite sensitive. As usual, the pessimistic Damon isn’t interested in the emotional display and instead gets drunk and talks to Alaric’s (Matt Davis) gravestone. At the end of his rant, a dead Alaric appears and says, “I miss you, too, buddy.” It’s just too bad Damon couldn’t see him.

Wonder what’s in store for Season 4? Watch this LOL clip of the cast dish about what’s up next.

22 mins ago
by Daisy Maldonado