The former Playboy model seems happier now than she ever has been before. She and her boyfriend have announced their baby will be a girl, even if they didn’t mean to let the news out quite so soon. 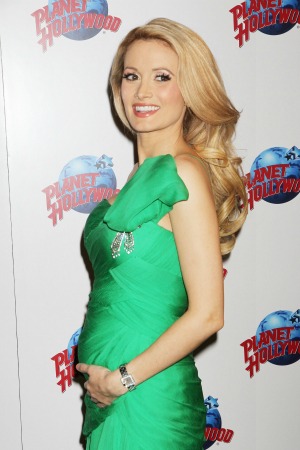 Leave it up to the guy to let a secret slip about your baby’s gender. That is what happened on Tuesday when Holly Madison‘s boyfriend, Pasquale Rotella, tweeted out a note to his girlfriend.

“Off to Amsterdam and I already miss my girls @hollymadison,” Rotella said, along with a photo of Madison and a sonogram.

Madison replied, “We miss you! Xoxoxo.”

The 32-year-old former girlfriend of Hugh Hefner later confirmed the news of a baby girl to People.

“I’ve wanted kids, and that’s something I’m definitely doing as soon as possible,” Madison said in June. “I’m not pregnant right now, but if that happened tomorrow, I’d be fine with it.”

The couple have been together for less than a year, but back in June, the former Playboy model told People she wasn’t doing “anything to prevent it.”

The couple first announced their pregnancy in August.

“Holly and I are so excited to announce that we are going to be parents,” Rotella told People at the time. “We’re in love and counting down the days until we meet our beautiful baby. I can hardly believe how lucky I am.”

Madison added that having a baby now is the right time, because she finally feels like she has found the person she wants to be with for the rest of her life.

“Definitely, being with the right guy has a lot to do with it,” explains Madison. “My relationship is awesome. I’m happier than I’ve ever been in my personal life.”

Over the years, Madison has attempted to venture into TV and film. She has played characters like “Hot Blonde,” “Blonde #1” and “Playboy Bunny,” but she has made many more appearances as herself. It seems like she may have learned that’s what works for her. She said she is currently working on several (unannounced) projects, but when a family comes, that will absolutely be her top priority.