The actress is a huge fan of the child pageant queen. So much so, she even changed her house to watch the show. But as for her fiance, he doesn’t exactly agree. 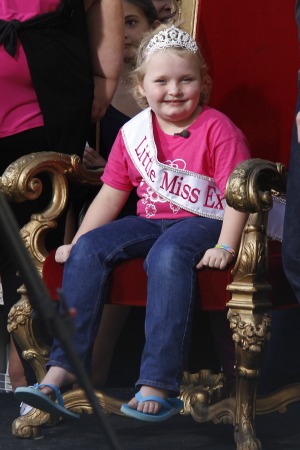 Miley Cyrus stopped by Chelsea Lately Wednesday night, and it seemed like all she could talk about was her new favorite 7-year-old. She loves Honey Boo Boo so much, she even made improvements to her house because of the child.

“Oh my God, since you saw me last, I put in a home theater in my house, and then it wasn’t quite loud enough, so we got subwoofers,” Miley told Chelsea Handler, according to Erin O’Sullivan with Access Hollywood. “So, I can really hear [Honey Boo Boo] extra loud.”

The actress admitted that she can’t get enough of Here Comes Honey Boo Boo, on TLC.

“So when I hear her go, ‘Holla for a dolla,’ it’s like the whole house shakes!” she said.

But Cyrus’ fiance, Liam Hemsworth, doesn’t agree with his future wife on the merits of the show.

Cyrus was appearing on Handler’s show to talk about her new album as well as her guest appearance on Two and a Half Men, which will air Thursday night on CBS. And for anyone watching the show, they may see some resemblance to Alana “Honey Boo Boo” Thompson, according to O’Sullivan.

Handler asked, “Is that who you modeled your character from Two and Half Men after? Because it sounds like a little Honey Boo Boo.”

Meanwhile, Honey Boo Boo and her family are up to more than just shooting new episodes of their show. After Christopher Walken was filmed reading quotes from the 7-year-old last week on The Screen Junkies Show on CNN, Thompson returned the favor. The child and her mom replied by reading lines from his movies Balls of Fury and Catch Me If You Can as well as Walken’s famous “Needs more cowbell” Saturday Night Live skit.

You can catch Cyrus, inspired by Honey Boo Boo, Thursday night on Two and a Half Men.