Miley Cyrus knows Nick Jonas was thinking about her when he penned “Wedding Bells.” What’s the engaged actress got to say about The Jonas Brothers’ sad love song? “Whatever,” and much more. 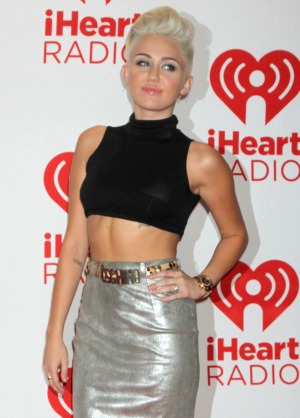 Miley Cyrus and Nick Jonas may have broken up long ago, but it ain’t over yet. The actress is well aware his latest song is about her, calling the “Wedding Bells” lyrics “pretty blatant.”

“I don’t know anyone else who is getting married,” the future wife of actor Liam Hemsworth reasoned. “It’s whatever.”

Opening up a bit more while speaking to Ryan Seacrest on his morning radio show, the 19-year-old added, “Like I said, everyone has to write songs that are about things that they felt, and he even introduced that this isn’t the way that I am.”

Miley Cyrus talks about proposal, Liam gets a matching tattoo >>

Softening further, Cyrus added, “So, you can’t ever hate on someone for writing about something you’ve been through. I think that you kind of get a fair warning when you date an artist and someone that’s a writer — when you’re going through things… you’re going to end up hearing about it on the radio.”

Second-guessing her assumption for at least a moment, however, Miley Cyrus added, “I don’t know… wedding bells are in my future, so I don’t know.”

Nick Jonas and Miley Cyrus dated from June 2006 to December 2007. The Jonas Brothers singer went on to date actress and singer Delta Goodrem from May 2011 to February 2012. Though the Australian beauty has been engaged before, that relationship ended before she and Nick got together. Still, one has to wonder if Delta is at all insulted not to be the ex- Nick is singing about!

How do you think Miley Cyrus did responding to Nick Jonas’ “Wedding Bells” song?