Having a hard time keeping your work/home life in balance? Suck it up, says Hillary Clinton, because whining is for sissies. 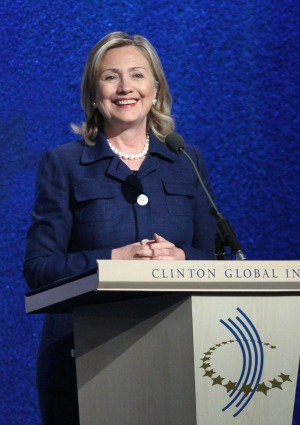 The age-old struggle of “having it all” isn’t a struggle at all, says Hillary Clinton. You just have to be the right type, and quit whining about it.

In an interview with Marie Claire, the Secretary of Defense says that woman can have it all — you just have to really, really work at it. She should know. She raised a smart, savvy daughter — Chelsea Clinton, now all grown up and a successful businesswoman herself — while building her own stellar career.

“Some women are not comfortable working at the pace and intensity you have to work at in these jobs… Other women don’t break a sweat,” Clinton said. “They have four or five, six kids. They’re highly organized, they have very supportive networks.”

So knock off the “woe is me act” and get to work, she said.

“I can’t stand whining. I can’t stand the kind of paralysis that some people fall into because they’re not happy with the choices they’ve made. You live in a time when there are endless choices,” Clinton said. “Money certainly helps, and having that kind of financial privilege goes a long way, but you don’t even have to have money for it. But you have to work on yourself… Do something!”

One something that Clinton says she definitely will not be doing is running for President in 2016.

“I have been on this high wire of national and international politics and leadership for 20 years,” Clinton said. “It has been an absolutely extraordinary personal honor and experience. But I really want to just have my own time back. I want to just be my own person. I’m looking forward to that.”

Read the complete interview with Hillary Clinton on MarieClaire.com.