The father of comedian Sarah Silverman has some rather ungodly words for an Orthodox rabbi who said his daughter is a bad Jew. 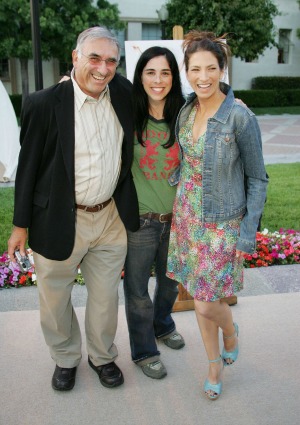 Sarah Silverman‘s father is a rather feisty fellow, it turns out. The comedian’s dad hit back at an Orthodox rabbi who accused her of being a terrible Jew with some harsh words that surely made the religious man stutter.

The trouble started when Rabbi Yaakov Rosenblatt published an open letter to the star on JewishPress.com in response to her use of “biblical language” in her Let My People Vote campaign.

“You will soon turn 42 and your destiny, as you stated, will not include children. You blame it on your depression, saying you don’t want to pass it on to another generation,” the rabbi wrote.

“Surely you appreciate being alive and surely, if the wonder of your womb were afflicted with your weaknesses and blessed with your strengths, it would be happy to be alive, too. I think, Sarah, that marriage and childrearing are not in the cards for you because you can’t focus on building life when you spend your days and nights tearing it down.”

“That is why you have had trouble forging a permanent relationship — the most basic desire of the feminine soul. Nothing you say or stand for, Sarah, from your sickening sexual proposal to a Republican donor to your equally vulgar tweet to Mitt Romney, has the slightest thing to do with the most basic of tenets which Judaism has taught the world — that the monogamous relationship is the most meaningful one and that a happy marriage is the key to wholesomeness.”

Sarah’s father struck back in defense of not just his youngest daughter, but all his kids.

“Not by your standards. She’s reform. How dare she, a lowly woman think god wants her to be a rabbi, created from a mere rib. Her hubby, three times nominated for a nobel peace prize was listed by the Jerusalem Post as the 49th most influential jew in the world built the worlds largest solar field in Israel.”

“By the way, Sarah was also on the list. I missed your name. Oldest granddaughter is serving in the Israel Defense Forces. I’m sure you also served. Oh I forgot the orthodox don’t do that.”

“You don’t f*** with my family. Is your wife allowed to go to a minion or sit at the front of a bus or choose between abortion or birth. Take your false god and shove god up your judgmental a**.”

Sarah couldn’t be more thrilled with her father’s response. “Oh, Dad! You’re my hero. Where do you get such moxie??” she wrote on Twitter.