Once Upon a Time is ready for a new kind of evil. It’s someone as devious as Regina and conniving as Mr. Gold. Say hello to everyone’s favorite pirate — Captain Hook. 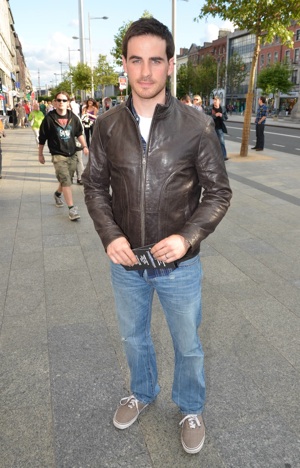 This Sunday, Once Upon a Time introduces another fantasy favorite. It takes us to the high seas to visit Killian Jones aka Captain Hook! Back in August it was confirmed that Irish actor Colin O’Donoghue was cast in the pivotal role. Now, it’s time to see him in action.

Once Upon a Time finally unveils its Captain Hook >>

ABC has released a sneak peek at the upcoming episode “The Crocodile,” which introduces the character. It turns out Hook has a past with Rumpelstiltskin, or should we say the man who would become the trickster. In the following clip, Rumple sneaks onto Hook’s ship while looking for his wife.

As expected, Hook is charming at first, but soon reveals his true nature. If Rumple wants his wife, he’ll have to physically take her. At this point in the story, Rumple’s no fighter. In his past life he was known for being a coward. With someone like Hook pushing his limits, this can’t end well.

Interesting side note: the Captain’s signature hook is missing — in the video, he has both his hands. You know what that means? At some point during this season, it’s going to go bye-bye. Since this is Once Upon a Time, we don’t know how, and we don’t know when. But we do know it’ll be gone.

What do you think of the revamped Capt. Hook?