What’s cooking in Valerie Bertinelli’s kitchen is not what most interests Howard Stern. The shock jock naturally held nothing back when peppering the actress-turned-author with questions Wednesday, delving right into the issue of personal grooming habits. 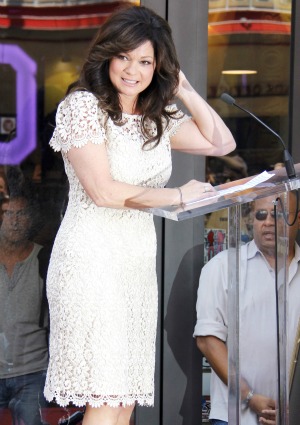 Valerie Bertineli‘s Howard Stern interview clip is fast becoming a hit, thanks to an all-too-personal line of questioning. Squirming in her seat, the 52-year-old actress attempted to dodge questions, when all she really wanted to talk about was her new cookbook!

Speaking of the recipes she’s ready to share with the world, Valerie Bertinelli explained earlier in the week of One Dish at a Time‘s recipes, “There’s a wide variety — some of them are super-healthy, things you can eat freely, and others are super-indulgent that require portion-control.”

“But that’s how I believe you should be eating: I really don’t think you should deny yourself anything. You can do it for a while, but eventually that just leads to bingeing — at least, that’s how I’d find myself handling it.”

Valerie Bertinelli’s weight-loss success proved to be one point of interest to Howard Stern during Wednesday’s radio interview, though not in the sense most people would expect.

After asking the woman who received a star on the Hollywood Walk of Fame this past August what it was like to date director Steven Spielberg when she was 19 (Stern reportedly “asked Valerie Bertinelli if Steven Spielberg’s penis is shaped like E.T.’s finger”), the Sirius XM Radio regular dared to get even more personal.

Check out the cringe-worthy Valerie Bertinelli/Howard Stern clip for yourself. (Warning! As mentioned above, the content contains adult themes and a bit of strong language to boot!)

How do you think Valerie did handling Howard Stern’s seriously personal questions?