Flavor Flav lived up to his bad-boy reputation last night: He was arrested for threatening his fiancee with a knife. Yes, seriously. 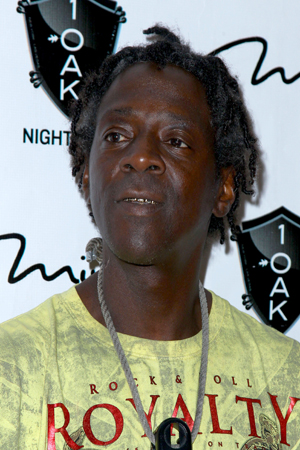 Remember how a bunch of women of questionable morals vied for Flavor Flav‘s heart on VH1’s Flavor of Love? These women should count their lucky stars that they never found “love” with Flav, especially since he was just arrested for assault with a deadly weapon.

According to Las Vegas police, Flav — real name William Drayton Jr. — was arrested around 3:30 a.m. Wednesday after threatening his fiancee and her son with a knife. He was booked on felony assault with a deadly weapon and misdemeanor domestic violence and later released on $23,000 bail.

Also, his booking photo is pretty epic. Looks like someone wasn’t wearing his teeth when he got arrested.

It’s been quite a mixed bag for Flav lately. He was nominated for the Rock and Roll Hall of Fame for his work with Public Enemy, but he also made a fool of himself in September when he confused Miley Cyrus for Gwen Stefani at the iHeartRadio Music Festival.

Why is he in Las Vegas? He moved to Sin City last year to open Flavor Flav’s Fried Chicken. He first tried the restaurant in Iowa but closed after a dispute with his partners. Residents weren’t exactly upset with the loss: One patron told SheKnows that the chicken was nasty.

“They were out of the cornbread and it took 15 minutes for me to get my meal because they had to fry more chicken,” Melissa Strutz said. “The place smelled good from outside, but once you got inside and saw the whole… mess, it became less appetizing.”