Ana Gasteyer knows funny. For six years she slayed us in Saturday Night Live sketches like the infamous “Muffin Top” with Betty White, so we were ecstatic to see the actress pop up on the ABC sitcom Suburgatory. The show’s resident PTA mom, ever-amusing Ana banters with us about playing a nightmare neighbor, relishing long flights and eating like a lumberjack. 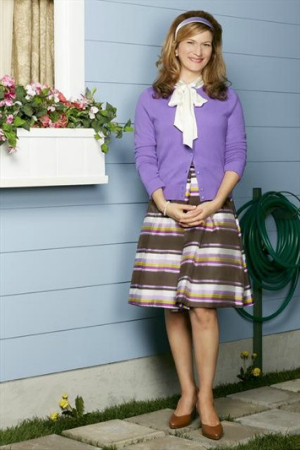 SheKnows: How did you land your sweet role on Suburgatory to start with?

Ana: Good old-fashioned casting! When this opportunity came along, the script was great and I really liked Emily [Kapnek, writer] and the part. Emily had big plans for it, which you know you don’t always fully believe, but it netted out to be honestly much more than my wildest expectations.

SheKnows: You have some killer co-stars! Jeremy Sisto, Cheryl Hines… is the set as fun as we imagine?

Ana: It is so fun! I don’t think I could do what I’m doing, in terms of commuting back and forth, if I didn’t love what I do so much. I really love my set — I love Emily, I love all my co-stars, I love my hair and makeup trailer. There are no egos. The “kids” are all really old souls. The grown-ups have all been around the block and are not interested in the drama. There’s a lot of joy on our set!

Ana: The writing is amazing! And it’s not just sharp joke writing… there’s a ton of emotional content, and Emily has no problem exploring that. That’s what’s so fun about Sheila — it’s not just the jokes, which are great, but it’s really more about the marriage and the way I treat my daughter and the way I treat my son, and the idea that I much prefer my son to my daughter and yet my daughter is much more similar to me. I think all of that is really interesting, dynamic stuff.

SheKnows: It definitely nails the unspoken awkwardness of suburban family life — especially Sheila, that perfect PTA mom who also happens to be the person people want to duck behind a hedge to avoid having to talk to.

SheKnows: Known a few Sheilas in real life, have you?

Ana: I think everybody does, don’t they? (laughs) I’ve had more people come up to me on the plane or whatever and say, “Oh my God, you remind us of our neighbor!” Everybody has fled from her!

What critics are saying about Suburgatory >>

SheKnows: Well, when you’re not chasing away neighbors at work, you have a busy home life with your husband and two children. How do you juggle all your roles personally and professionally?

Ana: For starters, I have an extremely able and connected partner. I’ve been married — my God, what year is it? 2012? —16 years this year and we’ve been together longer than that, so he is definitely up to the task of picking up when I’m in L.A. Also, I’m embarrassed to say that I’m as organized possibly as Sheila. I spend a huge amount of time just planning and coordinating and kind of managing my household in a weird way. When I’m working I spend a huge amount of time working — which it’s a very social job, thank God! — and when I’m home, I’m mothering and making a point of one date night with my husband. My alone time is on the plane… so please if you see me on an airplane, don’t talk to me! (laughs)

SheKnows: We’ll put the word out!

Ana: People always say to me, “Don’t you hate flying back and forth?” And I’m like, “I think it’s heaven!” Nobody talks to me, I stare out the window, I read Real Simple… it’s awesome!

SheKnows: Earlier, you mentioned some strange dynamics on the show between Sheila and her kids. Are there any specific things you do with your kids to make them feel like they’re your focus?

Ana: My kids have a big age split — I have a 4-year-old son and a 10-1/2-year-old daughter. I find that with my daughter it’s evolved into more grown-up conversations about real things, and with my little one it is more about how many hours you can play Ninjago in a day. (laughs)

Television as a conversation starter >>

SheKnows: How do you eke out time together as a family?

Ana: We have routines — you have to put in your little traditions. Living in New York City, I actually leave a lot for Suburgatory in L.A. on Monday mornings. So we have a diner — you know, just a New York diner — that we go to and have a diner breakfast. Kids can be tired at the end of the day, so trying to plan something then can be more challenging than just getting up early and going out and having a lumberjack breakfast together before school.

SheKnows: That sounds amazing, actually! Any more family-time advice for other working moms that might help preserve what little bit of cerebral gray matter isn’t taken up by the daily D’s of diapers, daycare, dates and deadlines?

Ana: I do really think any time you have, you make it work. You have to get creative! Like I said, I read way too many organizing books and it’s all about finding those pockets. If breakfast can be a really special bonding time for your family, then go for it.

Tune into the season premiere of Suburgatory tonight (Wednesday, Oct. 17) at 9:30/8:30c on ABC to see how Ana manages motherhood in the ‘burbs as Sheila Shay!