Arcade game characters: They’re more than what meets the eye. 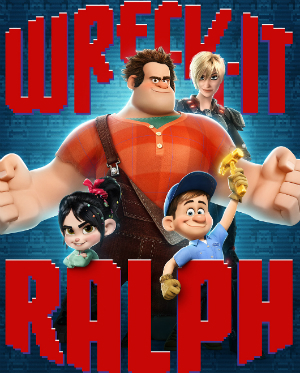 Enjoying an Italian feast with Mario and Luigi may sound a bit like a 7-year old boy’s fantasy, but when you watch Wreck-It Ralph, you will not only be living a dream, but also gain quite a unique perspective on the behind-the-scenes world of arcade game characters.

Unfortunately for Ralph, the villain of the arcade game Fix-It Felix Jr., he will never be invited to the Italian dinner party that the Super Mario brothers throw, and he feels as though he will never be treated nicely by the other characters in his game.

For the past 30 years, Ralph has been doing the same job day in and day out. He has grown quite sick of being labeled as the “villain.”

To gain some respect, Ralph leaves his game through the power cord and lands in Hero’s Duty, a light-gun shooter game where the goal is to kill “Cy-Bugs.”

After a mishap, Ralph winds up in Sugar Rush, a kart-racing game set in a sugar-lover’s dream world. There, Ralph meets one of the game’s characters, a sharp and quick-witted girl named Vanellope von Schweetz, who later discovers her game is in jeopardy due to Ralph’s presence.

Animated much like an energetic arcade game character himself, Rich Moore, the director of Wreck-It Ralph, sees a lot of himself in the main “villain” of this new Disney animated movie.

“I kind of see the parental side of myself in Ralph with my kids because I think Ralph goes from someone who is kind of an immature person in the story to someone who looks outside of himself and starts caring for this kid [Vanellope] as if he is like a big brother or dad to her.”

At the same time, Rich also identifies and associates himself with Vanellope.

“She can feel what it is that she was built for and as a young kid I always had this drive of working in animation from the first time seeing an animated film, The Jungle Book. I had no idea how they did it or how it was made, or what that even meant, but I knew that I wanted to be there, so I was very single-minded about trying to achieve that dream, a lot of the way that Vanellope is so confident in herself as a racer in Sugar Rush.”

Regardless of which character Rich related to the most, he grew quite fond of the real-life characters representing them.

“I really, really enjoyed working with the people involved with the movie, we had so much fun, especially with the cast,” Rich revealed with a slight glisten in his eye as he reminisced about working on this movie with John C. Reilly (Ralph), Sarah Silverman (Vanellope), Jack McBrayer (Fix It Felix Jr.), and Jane Lynch (Sergeant Calhoun).

But, don’t worry, Wreck-It Ralph will not bring tears to your eyes. Quite the contrary, it will only make you excited and animated about a possible sequel. Rich would most certainly be on board if presented with the idea.

WATCH OUR INTERVIEW WITH THE DIRECTOR AND CAST