Penny scores a hot boyfriend. Dave and Alex get back together. See what else the cast of Happy Endings told us at their Season 3 premiere! 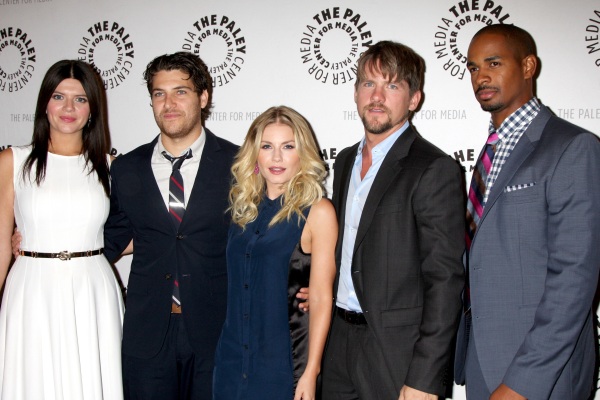 It’s what everyone has been waiting for: Happy Endings’ former couple Alex (Elisha Cuthbert) and Dave (Zachary Knighton) are getting back together!

Last night we caught up with the hilarious cast at their Season 3 premiere at the Paley Center for Media, where Cuthbert let us in on the couple’s reunion. “I don’t know where it’s going to go but as a couple, we’re generating so many funny things that I’m loving it,” said Cuthbert.

The first episode begins with the couple back together, and everyone in the gang acting like it’s no big deal. Whether it will last, though, is anyone’s guess.

At the same time, last season left us with the info that Penny (Casey Wilson) is actually secretly harboring feelings for Dave. But don’t feel too bad for Pen — Casey tells us she’ll be getting her fair share of action this season as well.

“Penny has a good year,” said Casey. “She has a boyfriend, Nick Zano. [Brian Austin Greene] doesn’t stick around. He’s not a ‘BAG’ that she wears much longer. Nick Zano stays for about six to eight episodes, maybe more.”

Meanwhile, power couple Jane (Eliza Coupe) and Brad (Damon Wayans Jr.) will be going through some hard times as Brad deals with unemployment. “You’ll see him unemployed and taking on a lot of odd jobs,” said Wayans. “He’s had four so far.”

Jane, on the other hand, seems to be falling apart.

“She goes full-on nutbag,” said Coupe. “She basically goes off the rails. I wear these crazy outfits now. I was dressed as a Rockabilly last week with pink hair. Jane likes to pull out a costume.”

And as always, Max (Adam Pally) will be up to his usual bizarre behavior.

We’re not totally sure what that means, but you can expect to see some reappearances of Max’s songstress side. “I don’t know if there will be any more ‘Mandonna,’ but you might see some other bands Max has been in,” said Adam.

We’re looking forward to it!

Be sure to catch the Season 3 premiere of Happy Endings on ABC on Tuesday, Oct. 23 at 9/8c.