It’s being called the best debate in American history. Four years, an election and the future of the country was at stake last night when Obama and Romney took the stage. 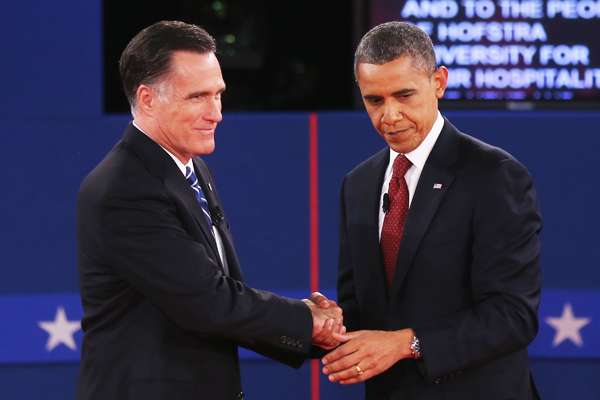 Mitt Romney and Barack Obama valiantly (minus a few lies) fought their way to the end of the debate last night. After a lethargic performance the first round, President Barack Obama came out as an aggressive and feisty man who wanted to keep his office. Mitt Romney fell short of his first impression, but not of determination. Here are the SheKnows essentials of debate number two.

With an unfathomable amount of pressure from the Democratic Party to do better than his dismal performance during the first debate, Obama delivered. We’re not sure if he was riding on a post-Biden smile high, had vats of caffeine or was saving his aggression for round two. He displayed complete confidence in his platform, and he defended that platform well. Obama undoubtedly impressed the nation with his quick remarks and political bite, and put round two in his victory bag.

This guy isn’t one to go out without a fight. Romney was way off his game compared to the first debate; perhaps he was taken off guard with just how aggressively Obama refuted every word he said. That didn’t change his visible desire to win. Their tension and dislike toward each other was palpable through millions of TV screens across America. If they weren’t politicians there would have been fists flying, but verbal and factual fists were more entertaining in this case.

Look at the size of your pension!

One of the most tense moments of the night was when Romney went off the topic of immigration and defended where he invests parts of his pension. Obama had said earlier that his opponent, despite being anti-China and keeping money in America, has investments in Chinese companies. Romney stole a moment at the end of his own mini-speech on immigration to defend himself, citing that Obama too has investments in overseas accounts, including China. The president turned that around against his opponent.

Mitt Romney: “Mr. President, have you looked at your pension?” (Repeat too many times.)

Barack Obama: “I don’t look at my pension. It’s not as big as yours, so it doesn’t take as long.” (Laughs semi-maniacally.)

The room fell silent when a citizen asked the president who is responsible for the terrorist attack that killed four Americans in Libya. Despite Hillary Clinton telling CNN earlier this week that she was ultimately responsible for the deaths by failing to provide more security, Obama said he is responsible for the safety of Americans serving their country overseas, and for those who were killed. Hillary Clinton works for him. Romney used this offensively, saying the president admitted he failed to prevent the tragedy and therefore the Obama administration is failing in terms of security. Obama refuted this statement by saying Romney immediately and disgracefully used the attack as a political device for the election. This issue was a hot topic of the night, with banter flying between both the candidates and moderator Candy Crowley, who arguably helped the president by correcting Romney on a key fact: Obama called it terrorism from the beginning.

Remember that little video that came out weeks before the first debate? The one where Mitt Romney remarks that 47 percent of Americans consider themselves victims who refuse personal responsibility? Surprisingly, Romney brought it up himself. Whether that was a mistake or not, time will tell. A citizen asked Romney what is the biggest misinterpretation about him as a candidate, and Romney said the Obama campaign uses this incident to paint him in an anti-American light. Romney defended himself by saying he is for 100 percent of American people. Obama won emotional points when he used this opportunity to stress the 47 percent Romney was (possibly) referring to were veterans, students, retirees and his grandfather.

Romney: Claims women have lost 580,000 jobs in the past four years

Steven Greenhouse and the New York Times points out that the Bureau of Labor Statistics indicates there are 253,000 more women working in the country than when Obama took office in 2009.

Obama: Claims coal jobs and coal production are up

John M. Broder at the New York Times says this is true, but the increases are modest, and additional coal production is being shipped overseas.

Quotes of the night

Romney: “The president’s campaign tried to characterize me as someone that is very different than who I am. I care about 100 percent of the American people. I care about our kids.”

Obama: “While we were still dealing with our diplomats being threatened, Governor Romney put out a press release, trying to make political points, and that’s not how a commander-in-chief operates.”

Candy Crowley: “He did, in fact, call it an act of terror.”

Romney 1, Big Bird 0
Teaching children about the presidential election
Michelle Obama: We are better off than four years ago