Mitt Romney inspired yet another web meme when he told the debate crowd that he had “binders full of women” during his tenure as governor of Massachusetts. 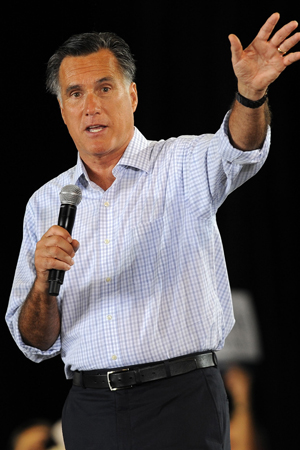 GOP presidential hopeful Mitt Romney and President Obama went head to head Tuesday night in the second of three debates — and luckily Big Bird was left out of it. Instead, the candidates went full throttle in on each other on topics ranging from gun control to the Sept. 11 Libya attack.

It was tense — and at one point we thought Romney and Obama would exchange a few blows.

The biggest moment of the night was when an audience member asked the candidates about equal pay for women.

“In what new ways do you intend to rectify the inequalities in the workplace, specifically regarding females making only 72 percent of what their male counterparts earn?” the undecided voter asked.

Obama answered with comments about passing the Lily Ledbetter Fair Pay Act designed to give women equal pay for equal work. Romney, in turn, talked about his female-dominated cabinet while governor of Massachusetts. He told an anecdote of how his advisers couldn’t find qualified women for those positions.

Stacey Dash advised to kill herself over Romney plug >>

“And I — and I went to my staff, and I said, ‘How come all the people for these jobs are — are all men.’ They said: ‘Well, these are the people that have the qualifications.’ And I said: ‘Well, gosh, can’t we — can’t we find some — some women that are also qualified?’ And — and so we — we took a concerted effort to go out and find women who had backgrounds that could be qualified to become members of our cabinet. I went to a number of women’s groups and said: ‘Can you help us find folks,’ and they brought us whole binders full of women.”

It’s getting to the point that it’s almost more entertaining to watch social media during the debates than actually watching the debate. What memes will come out of the third debate? We’ll see next Monday night during the final meeting between the candidates in Boca Raton, Florida.