The actress and U.N. ambassador decided that sharing the story of Malala Yousafzai, a teenage education activist who was shot by Taliban gunmen, was important, and hopes other parents will talk with their children about the tragedy as well. 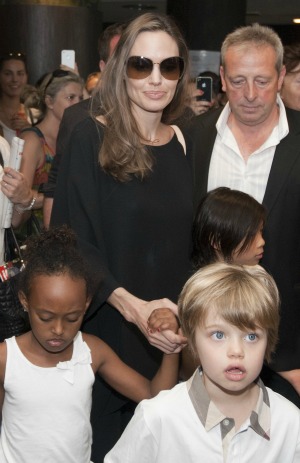 It looks like Angelina Jolie and Brad Pitt’s kids are going to follow in their parents’ footsteps.

Jolie wrote a post for The Daily Beast about why she told her children about the 14-year-old girl, Malala Yousafzai, who was shot by the Taliban for speaking up for women’s education.

“After reading the article, I felt compelled to share Malala’s story with my children,” Jolie wrote, after the reading The New York Times article on the shooting. “It was difficult for them to comprehend a world where men would try to kill a child whose only ‘crime’ was the desire that she and others like her be allowed to go to school.”

Jolie continues by saying her children attended school that day, but returned home with questions about the teenage victim, and wanted to learn more.

“We learned about Malala together, watching her interviews and reading her diaries,” Jolie wrote. “Malala was just 11 years old when she began blogging for the BBC. She wrote of life under the Taliban, of trading in her school uniform for colorless plain clothes, of hiding books under her shawl, and eventually having to stop going to school entirely.”

The children of Jolie and Pitt came home with different questions about Yousafzai.

“Our 8-year-old suggested that the world build a statue for Malala, and fittingly create a reading nook near it,” she said. “Our 6-year-old asked the practical question of whether Malala had any pets, and if so, who would take care of them? She also asked about Malala’s parents and if they were crying. We decided that they were, but not only for their daughter, also for children around the world denied this basic human right.”

Jolie expressed how important it was to her to share the story with her children, and she hopes others will take Yousafzai’s story and share it with their own children. Jolie’s children asked why Pakistani women would hold vigils for Yousafzai when they knew they were in danger for doing so, to which Jolie answered that standing up for her is more important to them than that. They also asked why the Taliban did what they did.

“Why did those men think they needed to kill Malala?” her children asked. She replied, “Because an education is a powerful thing.”