The awards show will see new hosts for the first time in four years, and the most recent host has a few things to say about that. 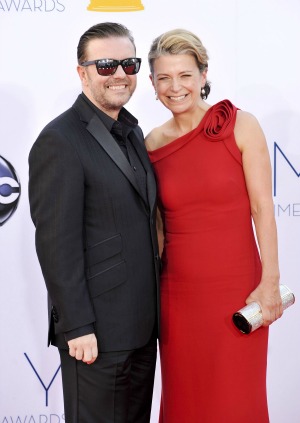 Ricky Gervais has been hosting the Golden Globe Awards for the past three years, and was quite the controversial host.

He was one of the first to make jokes about any celebrity he chose, and critics and celebrities alike were not quite sure how to take it. And finally, after a third year of mixed reviews, this year the awards decided to change things up a little. On Monday, NBC announced Tina Fey and Amy Poehler would be co-hosting the awards show.

It looks though like the comedian isn’t holding any grudges, except maybe against a certain entertainment TV network.

“Good luck to Tina Fey and Amy Poehler at the Golden Globes,” Gervais told Entertainment Weekly. “After failing three years in a row to make E! Channel’s Best Dressed list, I decided to hand over the reins. Let me know if you run out of Scientology gags.”

The female co-hosts seem like they would be much less likely to “scare the pants off A-listers,” as Entertainment Weekly so eloquently put Gervais’s act, but will offer comedy just the same. And they go way back — Fey and Poehler have been friends since before their Saturday Night Live days and are considered two of the forewomen in comedy today.

But Gervais won’t be left out in the cold anytime soon. The 51-year-old has started multiple TV shows and while The Office may be winding down, he always has more up his sleeve. He is considered the creative genius behind the British and American incarnations of The Office as well as hosting his own show, The Ricky Gervais Show.

The awkward part could come if The Office is nominated for a Golden Globe. Will Gervais act out at the awards ceremony, or will he sit there like a nice, normal nominee? Chances are (learning from past experiences) that the comedian would not be able to keep his thoughts to himself.