Susan Sarandon a casting-couch victim? Sadly, before the actress became well-known in The Rocky Horror Picture Show, she faced a fright of another kind. In the latest issue of ELLE, Susan Sarandon recalled the icky encounter. 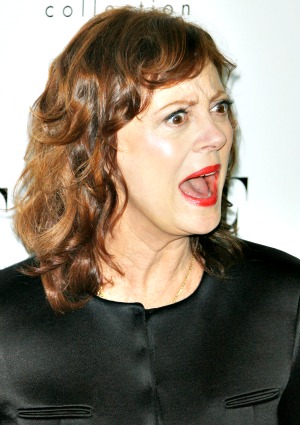 Susan Sarandon‘s casting-couch tale of sexual harassment dates back to her early days in New York, which were often spent schlepping from one acting audition to the next.

There, in the Big Apple, the woman who would go on to become an Academy Award Winner was offered a role in exchange for sexual favors.

“I just went into a room, and a guy practically threw me on the desk,” Susan Sarandon told ELLE magazine. “It was my early days in New York, and it was really disgusting. It wasn’t like I gave it a second though, it was so badly done.”

“It was not successful — for either of us,” Radar Online reports the 66-year-old went on to clarify, lest anyone think otherwise.

Susan Sarandon, seen here at ELLE’s 19th Annual Women in Hollywood Celebration in Beverly Hills on Oct. 15, did not disclose which role she was up for when the casting couch incident occurred.

The actress is, sadly, far from alone in having experienced or being all too aware of such creepy practices, however.

In a 1996 interview, actor Woody Harrelson declared “every [acting] business I ever entered into in New York seemed to have a casting couch… I’ve seen so many people sleep with people they loathe in order to further their ambition.”

Jenny McCarthy stated in 1997, “I was the only girl in my clique who wasn’t sleeping with someone to get a job.”

More recently, Megan Fox said in 2009 of her experiences, “Any casting couch s**t I’ve experienced has been since I’ve become famous. It’s really so heartbreaking. Some of these people! Like Hollywood legends. You think you’re going to meet them and you’re so excited, like, ‘I can’t believe this person wants to have a conversation with me,’ and you get there and you realize that’s not what they want, at all. It’s happened a lot this year actually.”

Are you surprised to hear of the pervasiveness of casting couch preying?