Paul Ryan is in hot water for sudsing up at a soup kitchen — because, it turns out, the whole photo op was faked. Now the people behind the charity are ticked. 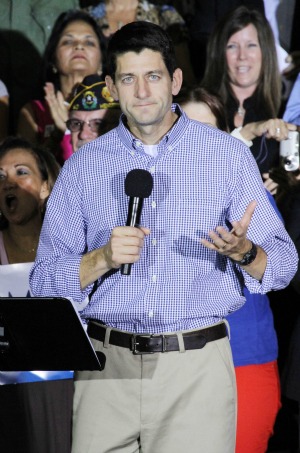 Vice Presidential candidate Paul Ryan just wanted to show he could roll up his sleeves and get his hands wet to help those less fortunate. Not surprisingly, the whole thing just blew up in his face.

After months of accusations that the Republican party — and the Romney-Ryan ticket in particular — don’t give a rat’s you-know-what about anyone other than the wealthy, Ryan drove that point home this week with a photo op mishap that has already become fodder for late-night monologues. Ryan was photographed supposedly helping out in a soup kitchen — but the whole thing was staged.

The dishes he was washing were actually clean. The facility itself was closed at the time. Ryan didn’t actually help anyone do anything, let alone anyone less fortunate get a hand up. And now the people who run the center are super ticked off.

Telling the Washington Post that the Romney/Ryan people “ramrodded their way” into the soup kitchen, the president of the Mahoning County St. Vincent De Paul Society said no permission was ever given for entry or photos.

Rage against Paul Ryan: No, you’re the machine! >>

“We’re a faith-based organization; we are apolitical because the majority of our funding is from private donations,” Brian J. Antal told the Post. “It’s strictly in our bylaws not to do it. They showed up there, and they did not have permission. They got one of the volunteers to open up the doors.”

“The photo-op they did wasn’t even accurate. He did nothing. He just came in here to get his picture taken at the dining hall,” Antal said, explaining that by the time Ryan arrived the meal was long over and everyone had left.

“Had they asked for permission, it wouldn’t have been granted,” Antal said, because of fears private donors would withdraw funds. “But I certainly wouldn’t have let him wash clean pans, and then take a picture.”

The Romney campaign maintains they had permission to be on the site.