NBC’s The New Normal is a modern and funny sitcom about the family you have and the family you create for yourself. It may have a few of the same markers that made Modern Family a success, but it’s also funny (and unique) in its own right. 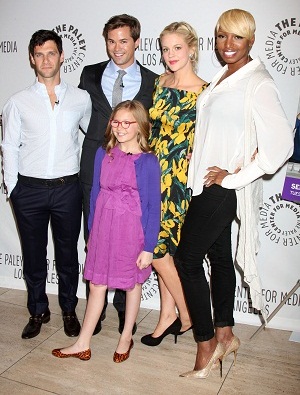 If you haven’t seen The New Normal yet, you’re missing out.

The basic gist is this: David (Justin Bartha) and Bryan (Andrew Rannells) have been together forever and have decided that they want to have a baby. Since they’re missing half the relevant parts, they ask Goldie to be their surrogate. Goldie recently moved to California to start over with her daughter, Shania, after leaving her husband (her high school sweetheart) in Ohio. Goldie’s Nana, Mrs. Forrest (Ellen Barkin), follows her because she thinks Goldie’s making a huge mistake. Barkin is unbelievably hysterical in that she plays an over-the-top version of a conservative. Nana thinks David and Bryan are going to hell for being gay and thinks her granddaughter might follow for giving them a child. Later, she nearly has a conniption fit when Goldie flirts with a cute African American guy.

Of course, Bryan is the stereotypical flamboyant gay guy and, yes, Mrs. Forrest’s role is also stereotypical, but they’re balanced out with characters that are anything but. David is sporty and completely oblivious to nearly all of Bryan’s pop culture references. Goldie, despite being a teenage mom, is smart and likeable, and you want to root for her. Shania is adorable, insightful and more than a little strange — especially when she spends multiple episodes pretending to be Little Edie from Grey Gardens.

So far this season, we’ve encountered each one of the characters facing “failure.” Goldie struggles with trying to be an example of a strong, independent woman for her daughter. David hurts Bryan by not being overly excited about their baby. As a doctor, David knows the risks of pregnancy and the many things that can go wrong, and is merely trying to just be rational and not get his hopes up until they’re in the clear. Nana, despite being conservative, weakens at the attention of a traveling salesman and quickly falls into bed with him only to have her cold, black heart broken. Meanwhile, 11-year-old Shania is hurt and embarrassed when her pretend wedding goes awry due to her pretend-fiancé’s “womanizing” ways.

The New Normal caused a bit of controversy when it first aired, but hopefully it’s here to stay. The show runs on a well-constructed equation of brilliantly funny one-liners and mildly gripping drama. It’s 30 minutes of quality entertainment centered around five (and a half) people you genuinely want to root for.