Charlie and Miles must stop Captain Neville from putting Danny on a train to Philadelphia, especially since there’s a bomb on board. The Old West meets the future in this action-packed, freight-car-hopping episode! 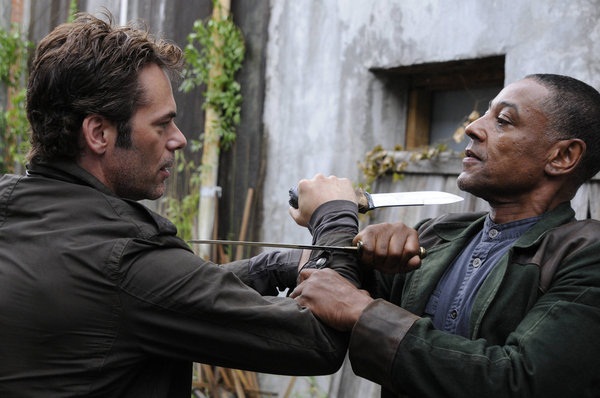 Revolution definitely inspires some burning questions, but one of the most prominent has to be “What’s the deal with Captain Neville?” Neville’s  (Giancarlo Esposito) one of those bad guys who looks like he has a heart for a moment and then does something awful — like beat Danny (Graham Rogers) to a pulp — and you realize he’s just an evil shell of a human being. But has he always been this way, or did the Blackout change him?

This week, we get some answers when we journey back in time to the day of the Blackout. Neville was meek, awkward and quiet. He was the type to be bullied by his boss and peers. Six weeks after the Blackout, an intruder broke into his home. He tried to protect his young son, Jason, and his wife, but was nearly choked to death in the process. Suddenly, he snapped and beat the man (presumably to death) in front of his wife and child. Later, he tells Jason that they have to toughen up to survive. They can’t let people see them weak or scared or they won’t make it. All these years later, he’s turned into those bullies he was trying to rescue his family from.

And what became of his son? Well, his son is currently being held hostage by Miles and Charlie. That’s right, Nate (J.D. Pardo) is more than just eye candy for Charlie in this story. He is Captain Neville’s son, Jason.

Not far from Captain Neville and Danny, Charlie (Tracy Spiridakos) and her crew bury Maggie and return to their mission of saving her brother (not without a little anti-pouting lecture from Uncle Miles first). Neville and his men are gearing up to take the first train out to Philadelphia in the morning, and that gives the group less than a day to figure out a way to save Danny before he’s out of reach. 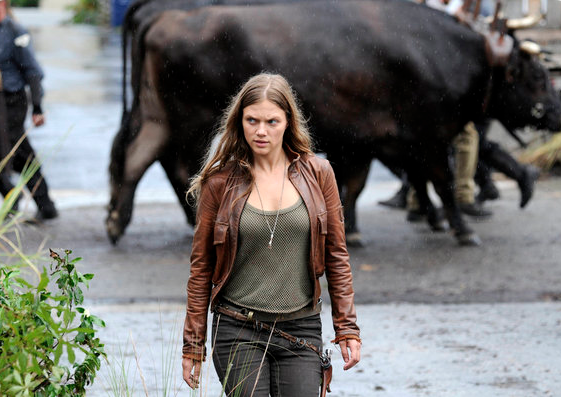 Nora (Daniella Alonso), on the other hand, has a different goal. Since there’s going to be a heck of a lot of militia on the train at once, she’s planning to blow it up and is just hoping that Miles (Billy Burke) gets to Danny before he boards the train. She teams up with a local member of the resistance, Hutch (Jeff Fahey) , who lost his wife to the militia and is ready to serve up some revenge.

Miles and Charlie had planned to surprise-attack Neville and his men, but Charlie ran into Neville in town and decided to stalk him instead. And she wasn’t really a stealthy ninja about it, so he figured it out pretty quickly. Now, he’s aware of their plan and forces the train to leave earlier than expected. This is bad news for many reasons — the number one being, Nora already put the bomb on the train.

Nora sees Danny on the train and tells Hutch they have to remove the bomb, but he’s not hearing that. Instead, he stabs her in the stomach. He’s apologetic about it, but he really needs to see some militia pay for killing his wife. 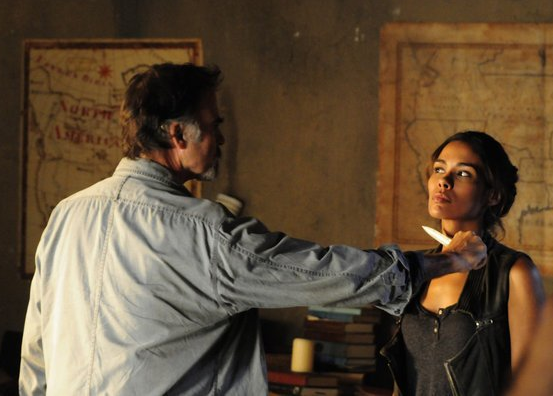 Miles and Charlie ride off on horses after the train (real Jesse James–type stuff). While Miles is jumping from one freight car to another, Charlie finds Danny, and together they attack Neville. Just when they’ve won the battle and are about to get away, Nate (or Jason — I don’t know what we’re supposed to call him now) shows up and stops them. Luckily, he seems to have a crush on Charlie, so he throws her off the train to save her from his father. Miles manages to throw the bomb from the train just in time, so Danny will, at least, survive the ride to Philadelphia.

In Philly with Monroe (David Lyons), Rachael (Elizabeth Mitchell) sees Danny has arrived and finally gives Monroe what he wants. Or, at least, a taste of it. She tells him she and Ben were working on something before the Blackout and if he wants to turn the power back on, he needs to collect the 12 pendants. If she knew the whole time, why didn’t she turn the power back on in the beginning??? So many secrets.

Wonder what your favorite characters are like behind the scenes? Check out this clip of star Graham Rogers talking about playing Danny.