Republicans say President Barack Obama has done nothing to turn the economy around — but First Lady Michelle Obama begs to differ. 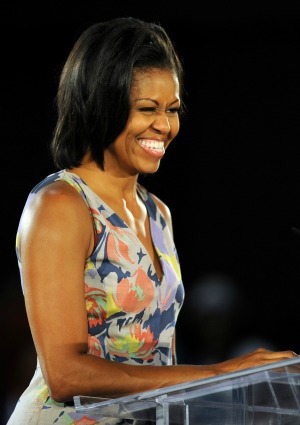 Mitt Romney is hitting President Obama hard with accusations that not enough has been done to turn around our weak economy — but First Lady Michelle Obama says that is simply not the case.

The First Lady is defending her husband’s record and pointing out that actually, we are better off than we were four years ago.

“I mean, we are seeing right now that we are in the midst of a huge recovery. Right?” Mrs. Obama told WPGC/Washington DC. “Because of what this president has done, pulled this economy from the brink of collapse when we were losing 800,000 jobs a month. Now were gaining throughout most of his presidency, we’ve been adding jobs to this economy because of what he’s been doing.”

“The stock market has doubled. Housing prices are rising. Foreclosure rates are lowering. But in the face of that, you still have people trying to convince us that things aren’t better. And that just doesn’t make sense.”

That doesn’t mean that we’re all diving into piles of cash Scrooge McDuck–style, of course. There’s still a lot of work to be done, she admits.

“Barack of all people knows that we still have a long way to go to completely rebuild the economy,” she said. “But we’re headed in the right direction. And when you see all of that truth, it’s hard to understand, why are people blocking this?”

And on election day, the president can be sure he has at least one person’s vote. The First Lady has already sent in her absentee ballot in favor of her hubby.

“I’m feeling pretty fired up and ready to go, because this morning, let me tell you what I did — I cast my ballot for Barack Obama,” she told the crowd at a campaign stop at Cuyahoga Community College in Ohio. “It felt so good. Right now my absentee ballot is on its way to my hometown, Chicago. That means we are one vote closer to re-electing my husband.”

See Mitt Romney and Barack Obama duke it out during their second televised debate on Tuesday, Oct. 16. Check local listings for channels and times.