The Walking Dead is back with a bang. The zombie drama’s returned with a record-breaking Season 3 premiere. Last night belonged to AMC, Rick Grimes and his group of survivors. 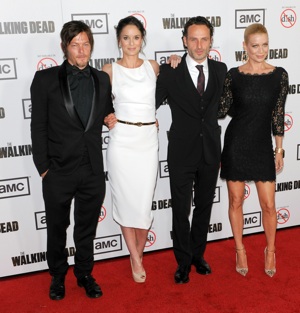 On Sunday night, amid stiff competition, The Walking Dead made a triumphant return. After months away, the AMC drama proved it was cable’s top dog. The Season 3 opener pulled in 10.9 million viewers for its initial 9 p.m. broadcast. But that’s not even the impressive part.

Fear the living in Season 3 of
The Walking Dead >>

According to The New York Times, The Walking Dead had a 18–49 demo rating of 5.8 with 7.3 million stemming from that audience. When it comes to scripted entertainment television, that’s a major feat. The only shows to achieve close to that are network giants like Modern Family (7 million), The Big Bang Theory (6.3 million) and The Voice (6.1 million).

The Walking Dead takes on Halloween >>

With the exception of sports programming, The Walking Dead is in a league of its own. If you include AMC’s multiple airings of the episode, its total viewers jump to 15.2 million. The series is currently the highest rated drama in basic cable history. That’s a big deal considering a chunk of AMC’s subscribers are MIA due to a dispute with The Dish Network. Could you imagine the numbers if that weren’t a factor?

The Walking Dead’s ratings are more than those of this year’s premieres of Mad Men (3.5 million), Breaking Bad (2.9 million), The Killing (1.8 million) and Hell on Wheels (2.5 million) combined.

If you were one of the millions who tuned in last night, you were thoroughly entertained. The premiere was filled with fast-paced action that set the stage for what’s to come. After last year’s lukewarm season, you can tell the writers are kicking it up a notch.

What did you think of The Walking Dead’s premiere episode?