Glenn Beck wants to outfit the men in your life with denim George Washington would have worn if jeans had been around back then. 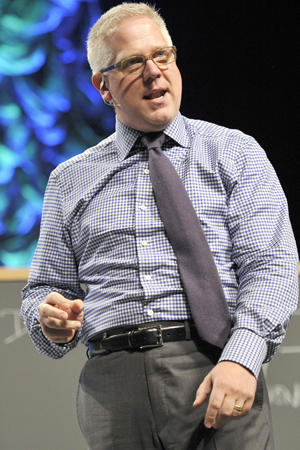 Glenn Beck is good at a lot of things: calling President Obama a Marxist, advising you to invest in gold, and telling you the world is basically going to implode soon. But is he a good designer of men’s jeans? Apparently so.

On Monday, the radio host introduced his new line of denim for men called 1791 Supply & Co. The collection is a nod to made-in-America craftsmanship.

“It is… difficult to find American products that you can be profitable on and are good quality. We don’t do it in America anymore,” he said Monday on FOX, according to the Washington Post.

Beck added that he wanted to “reclaim the lost art of making quality American clothing.”

The line — made exclusively in the United States — features two styles: classic and straight. The designs are pretty plain, but they should appeal nicely to the demographic. Beck’s official website says he was instrumental in the design “from the stitching, to the buttons, and to the quality of the rivets.”

Designer Tim Didonato was the “point-man on the design, working with Glenn to make sure his vision for the new line was executed,” the website reads. “He has been branding all of the labels on the back of the jeans by hand, as well as managing all of the details of the look of the jeans.”

But why does Beck care about jeans? Apparently, the whole thing started last year when Levi’s aired an ad that Beck felt “promoted revolution.” It’s a big stretch — if anything, the ad was meant to play off the Occupy Wall Street movement that was going on at the time.

Don’t look for these in WalMart, though: Glenn Beck’s jeans will be exclusively available at 1791.com for $130.