Estranged lovers Kristen Stewart and Robert Pattinson were photographed together over the weekend. Reunion… or clever ploy to promote Breaking Dawn — Part II? 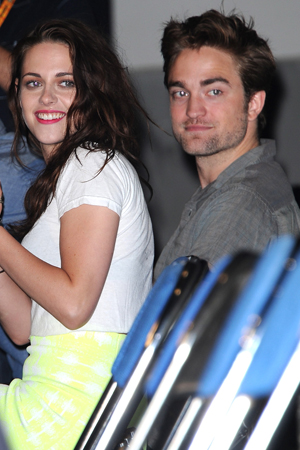 God has apparently answered our prayers: Kristen Stewart and Robert Pattinson are in fact giving their relationship another go, judging from a photo of the two taken over the weekend.

The shot — first published on EntertainmentTonight.com — shows the grimy pair out at the Ye Rustic Inn in Los Angeles.

Kristen Stewart is a total see-you-next-Tuesday, she says >>

It’s the definitive photo of the pair since Stewart admitted cheating on her Twilight boyfriend with her Snow White and the Huntsman director, Rupert Sanders. Rumors of their inevitable reunion have swirled since then, though whether it’s a genuine reconciliation or to promote Breaking Dawn — Part II is another question.

Unnamed sources have breathlessly reported every aspect of the pair’s purported reconciliation. Basically, Pattinson wants to give his girlfriend another chance, but he doesn’t trust her.

“Despite claims that all is rosy — he’s still not completely convinced that giving their relationship another chance is the right thing to do,” a source said in September.

“Although he’s his own man and makes his own decisions, there are times when he thinks they are right. And there are moments when he continually asks her questions about the affair — so it’s all still very tense — they have some really serious trust issues.”

Others say it’s KStew’s parents who are pushing for the pair to get back together.

“It ripped her [mom’s] heart in two when she saw those pictures of Kristen in a compromising situation with Rupert — and she couldn’t believe what her daughter had done,” a source told RadarOnline.

“As far as Jules was concerned, Kristen’s relationship with Robert was a match made in heaven, and she adored him like he was her own son. At first, she struggled to understand why Kristen wanted to cheat on him.”

We’ll buy all of this after the movie promo is finished. Until then, we’ll remain skeptical about the relationship — and hopeful for a single RPatz.