Taylor Momsen’s latest The Pretty Reckless project is a naked walk through the art of spoken word. Watch as the former actress goes nude — save for some serious eyeliner — in “Under the Water.” 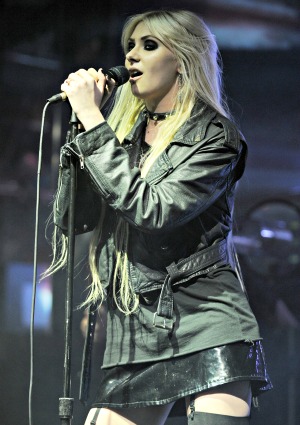 Taylor Momsen is mixing one part pop magic with one part art. Going nude in a video is sure to get the public’s attention, but is the music-loving public ready to embrace a spoken art performance?

Taylor Momsen‘s naked bod stars in the latest video from The Pretty Reckless, entitled “Under the Water.” In the video below, the I’m-no-longer-an-actress 19-year-old offers close-ups here, there and just about everywhere while made up in copious amounts of eyeliner.

Reciting lyrics from the track released on 2012’s Hit Me Like a Man EP, Taylor Momsen can be heard emoting, “Lay my head under the water/Alone I pray for calmer seas/And when I wake from this dream with chains all around me/I’ve never been free.”

Unfortunately for the former Gossip Girl star, not everyone is loving Taylor Momsen’s nude performance. Multiple comments on the “Under the Water” YouTube video suggest bluntly the teen might benefit from filling out her thin frame a bit.

Taylor Momsen exposes herself in the UK >>

“Damn girl, eat some bacon or something,” one well-liked comment reads. Others, however, support Taylor Momsen baring it all for art’s sake.

An insightful viewer added to the discussion, “What I take from this is by stating rather then [sic] singing it was meant to show a literal meaning to the words in connection to her feelings. That the nudity was shown as a literal euphemism of being laid bare; no lies or places to hide, and showing what was the product/result of what she had been made to long endure; and as a result what she had/has become. Lastly, the eyes still being blackened as a way to show the sorrow held tightly within them and the slow and subtle death of her heart…”

Check out Taylor Momsen in the buff for The Pretty Reckless here!

What do you think of Taylor Momsen’s nude “Under the Water” video?