Neal Schon pledges to be “forever yours, faithfully” as he proposes to Michaele Salahi onstage at a Journey concert. 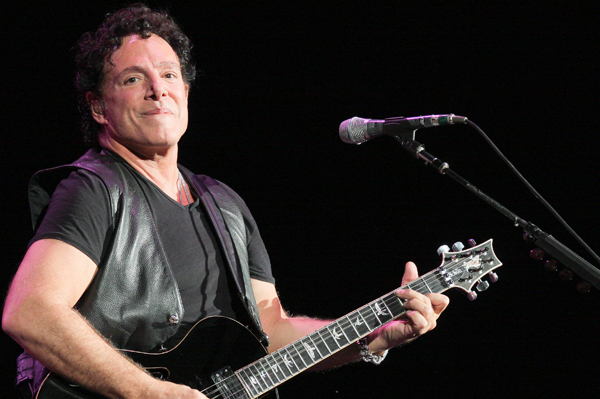 It’s been a crazy year for Journey guitarist Neal Schon and former Real Housewives of D.C. Michaele Salahi. First, the White House party crasher took off, leading her husband to believe she was kidnapped. Now, the pair is set to wed after Schon proposed during a Journey concert in Baltimore on Sunday.

“I had this whole thing I was going to do,” Schon told the Washington Post of proposing before playing their hit song “Faithfully.”

Michaele Salahi wants to give you cheating advice >>

“I started crying,” he said, prompting Salahi to start crying.

“We are reaching to the public pleaing [sic] desperately for your help. It is our belief as of last night, that Michaele Salahi may have been kidnapped or abducted and [is] being held under duress and forced to tell persons, including authorities she is okay,” the publicity-loving Tareq said at the time.

Oopsies, she wasn’t kidnapped — she was just on tour with Schon and Journey. Turns out the pair had been an on-again, off-again thing.

“It’s like a fairy tale. It is, it really is,” Neal told the Daily Beast of their relationship. “I’m very happy, very happy after waiting for her for 15 years. Now I want to get beyond all this media hype that Tareq has put out there. It’s really quite embarrassing.”

The big question: Why did she choose Tareq over the sexy rocker?

“I chose Tareq over Neal because I thought life would be less stressful living on a vineyard in Virginia,” she said earlier this year. “Life on the road with a rock band… well, I thought I might not have been able to keep up.”

Eventually, she decided she couldn’t live without Schon.

“I was going crazy,” she said. “Because when you want to be with someone that bad, you start to go crazy. He [Neal] sent someone to come get me. I got on a plane by myself and I just went. I just walked away from everything.”

Happily ever after? We’ll be watching!